Not to be confused with Social group.

Social classes are groups of townies introduced in The Sims 2: Apartment Life. They consist of Gearheads, Bohemians, Jocks, Techs, and Socialites.

Every lot is categorized in a low, medium, or high class. The class depends on how expensive the objects on the lot, how high the lot class surrounding the lot, how big the lot, and how many households consist in the lot if the lot is residential. The class determines which social class townie will appear more often and mingle there.

There are 10 pre-made townies per class, five males and five females, except for the Jocks, since one of them can only be found in the game files with SimPE.

Most of the social class townies will have low level jobs in the Culinary career at the start of the game; however, their careers will change to match their social class (read below) when they move in as a neighbor or are searched as an available roommate. 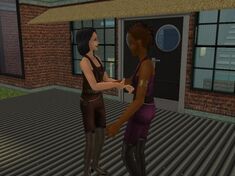 Gearheads are the lowest class. As a result, they appear in low class lots. Their gesture is a "Tough Handshake", and their favorite story is "Mechanics". The females usually wear black colored, torn clothes. The males usually wear "punk-like" clothes. Gearheads are usually employed in Architecture, Slacker, Journalism, Criminal, or Music careers.

The pre-made Gearheads are: 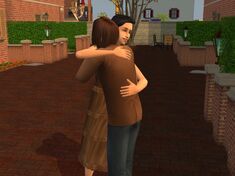 Bohemians are a mix of middle and low class. The bohemians are a group of nonconformists whose males usually dress with brightly colored suits. Their gesture is an "Earthy Hug" and their story is "Art". They are likely to be employed as an Artist, or in Dance, Culinary, Music, Natural Science, Entertainment, or Oceanography careers.

The premade Bohemians are: 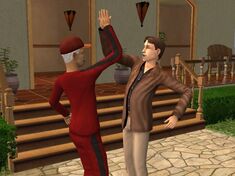 Jocks are the middle class. Both genders are usually dressed in sweats and sporties. Their gesture is a "High Five", and their story is "Sports". They are likely to be employed in Adventurer, Architecture, Oceanography, Athletic, Dance, Law Enforcement, or Military.

The premade Jocks are: 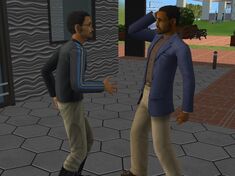 Techs are a mix between middle and high class. Techs are usually dressed in dark and modern suits. Their gesture is "Fake Out" and their story is "Computers". They are likely to be employed in Education, Business, Gamer, Science, Paranormal, or Intelligence.

The premade Techies are: 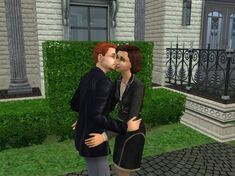 Socialites are the highest class. They are usually dressed stylish. Their gesture is "Kiss Kiss Darling" and their story is "Fame". They are likely to be employed in Business, Law, Politics, Journalism, Medicine, or Show Business.

The premade Socialites are:

Retrieved from "https://sims.fandom.com/wiki/Social_class?oldid=843726"
Community content is available under CC-BY-SA unless otherwise noted.