When the family is first played, it is around 10:00 am on Sunday, and is Johnny's last day as a teen. The family has bought a buffet table and birthday cake, in preparation for his birthday party, but the party has not started.

An official Maxis recreation of the Smith family was uploaded to the The Sims 4 Gallery on March 21, 2019, marking the 19 year anniversary of The Sims.

Smith: An English surname derived from the trade name smith. "Smith" happens to be the most common surname in the United States. This is quite ironic, seeing as these Smiths are anything but "common".
Pollination Tech#9 Smith: A reference to his previous occupation, as he comes from a long line of alien pollination technicians.
Jenny Smith: Short for Jennifer, means "white" or "smooth".
Johnny Smith: A diminutive of John, meaning God has favoured/God is merciful.
Jill Smith: Short for Gillian, which is the English form of Julia, which is the feminine version of Julian which means downy beard. 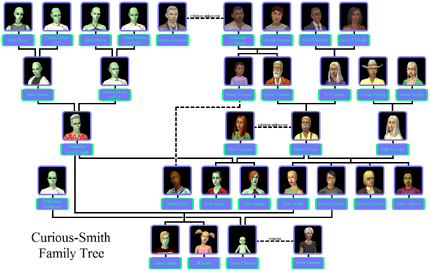 Johnny Smith as a baby

The Smith family with Johnny as a child and Jill as a toddler (note that Jill’s hair was removed before the game’s release.)

Entire Smith family
Add an image to this gallery
Retrieved from "https://sims.fandom.com/wiki/Smith_family?oldid=867714"
Community content is available under CC-BY-SA unless otherwise noted.