Merge
This article or section is being considered for merging with Shell. See the discussion page for details. 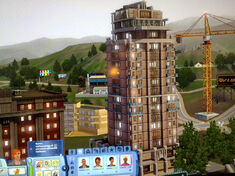 A view of some skyscrapers in The Sims 3: Late Night.

Skyscrapers are shell buildings that were introduced in The Sims 3: Late Night[1] and The Sims 4: City Living. They are "Shell buildings"[2] and only offer one or two floors.

Skyscrapers were first introduced in Late Night. Most of the skyscrapers include couple floors (such as the basement; some nicer penthouses have a second floor bedroom.) as a playable area for either residential penthouses or community lots, such as Bars.[3] More than one rabbit hole can be inside a skyscraper.[4] It is the first time in the series that a skyscraper can be made without the use of cheats, though they were available as neighborhood decorations in The Sims 2: Nightlife and The Sims 2: Apartment Life. Skyscrapers can be placed in build mode, though, as any rabbit hole, it has to be placed before a family moves in.

Skyscrapers return once again in City Living. They are more often seen as high story apartment buildings and usually have one to four apartments in them, though some of the skyscrapers also have a penthouse on top. Some of the buildings are mostly one-story, but there couple that have two stories. These skyscrapers can not be moved, edited or placed into another world by the player and are only found in San Myshuno.

Retrieved from "https://sims.fandom.com/wiki/Skyscraper?oldid=787589"
Community content is available under CC-BY-SA unless otherwise noted.