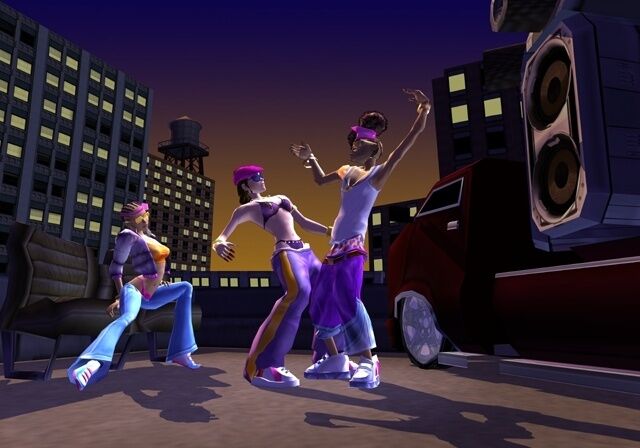 Welcome to Tar Beach, situated high above 125th Street. It's the closest you can get to the beach in The Urbz: Sims in the City's. While it may not have the surf, it has a view of the turf. Set amid water towers and business parks, hot concrete and asphalt roofs string together TV antennas and clothes lines while life bustles by in the city far below. There are few external walls, except for the hidden apartment tucked under the water tower and a VIP den known as the Red Room--guarded by one of the city's high-paid bouncers. Getting on this list is gonna take some rep building.

The top floor of the city's main parking garage is the stage for the VIP room, where hip vehicles and unique social devices await the experienced traveler who has earned the rep to step past the velvet ropes. Smoke billows from the trash chimneys along with heat vents that spin endlessly away cooling off the various businesses beneath your feet.

The side entrance to the largest custom clothing store in this part of the city extends southward. This is the shop to hunt through for the latest trends, riding the coolest vibes from music to movies and everything in between.

125th Street is near the heart of the city, but it's above ground, unlike Central Station. It sits west of the ritzy Diamond Heights district and is nestled within a canyon of skyscrapers that obscure the view southward to the South Side Bridge or westward to the Gasoline Row aqueduct. The half-dozen buildings that make up this open-air neighborhood connect via a web of walkways and simple gangplanks. A staircase leads to the basement where you grab the subway, and there's even a side entrance to the giant clothing store here on the northeast corner.

So bring some suntan lotion and a lot of attitude and be ready to show your stuff at a moment's notice, or you'll be outlawed just like those pigeon coops from this open-top city neighborhood.

Getting a reputation here will get one noticed by the residents of Gasoline Row.

Toot Sweet
Add an image to this gallery

Running this neighborhood is Isis Ice. She's the queen of cool and owns the offbeat job at the rooftop. You've heard of pigeon coops? No one buys pigeons. So Isis looked around to see what pets are hot and who's buying what in Diamond Heights. She came up with ferrets (which are technically illegal but are much more profitable than pigeons), and her converted ferret coop is booming with business. Think you can tame a few? She'll pay you megabucks if you're good and will show you the ropes for getting around.

While you're here, watch your back with Toot Sweet and Lil Bit--gorgeous on the outside but tough as coffin nails inside. These ladies made their way from nothing to self-started success stories. Along the way, they've danced, dined, decorated, and even done hair to keep their dreams alive. Now that they have reached those dreams, they won't let anyone take them away. Rounding out this area's notable personalities are chart stars Ridiculous D.O.G. and his cohort S. A. Loco. These bad boys know the street and have turned it into a hip beat that plays the airways.

Upon entering the VIP area around midnight, the player urb will recieve a Party Bomb social from Darius, which can be used to stop the villain Harry Snivel.

Like all other districts, Skyline Beach urbz will have relationships with other urbz based on which district they come from.

Skyline Beach urbz will use Greet, Act Friendly, or Act Romantic social moves with urbz from these districts.

Skyline Beach urbz will use random social moves with urbz from these districts.

Skyline Beach urbz will use Act Mean social moves with urbz from these districts.

P2
Add an image to this gallery 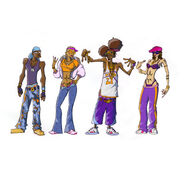 Retrieved from "https://sims.fandom.com/wiki/Skyline_Beach?oldid=898162"
Community content is available under CC-BY-SA unless otherwise noted.