watch 03:41
Wiki Targeted (Games)
Do you like this video?
Play Sound
Theories archived
Theory pages for Sims and families have been archived and locked. No new theory entries are being accepted on these pages at this time. Be sure to visit the Player Theories forum to add any theories on Sims or families in the game.

First of all, all precreated sims were made in CAS mode. How I know this is because Mortimer Goth was the first sim created out of the whole sims 2 game. You're probably wondering Well how did he learn all his toddler skills and everything.{C

He never learned his toddler skills! Maxis used SimPE, or a package editor tool like that to put those memories into his character files, making everyone assume he was potty trained and learned how to walk and so on. Back to the Skip Broke theory. He was created after Maxis created Brandi, Dustin, and Beau. Also, Maxis made the family trees, again with the help of simPE. Another thing is if you looks at Dustin Broke, he looks nothing like his mother or his father. Maybe in real life this can happen but in the game it is impossible to have different genetics from your mother or father unless the use of adoption. This is also visible with Alexander and Cassandra Goth. All characters for the storyline pictures are fake because look at the pictures next to the text (provided by Elisha from the theory below) and compare the first Brandi to the second Brandi. The first Brandi has the second face from CAS mode and the second Brandi is the real Brandi from the game! Also if you look at the storyline pictures for Pleasantview when looking at the background history story thing, it is clear the Caliente sisters from the picture look way different from the playable Caliente sisters. For my reasons above, I belive none of the Skip Brokes are the real fathers of Dustin, Beau and Unborn Baby Broke.--limegreen5 13:42, August 1, 2011 (UTC) 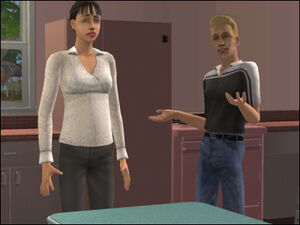 Retrieved from "https://sims.fandom.com/wiki/Skip_Broke/theories?oldid=852474"
Community content is available under CC-BY-SA unless otherwise noted.