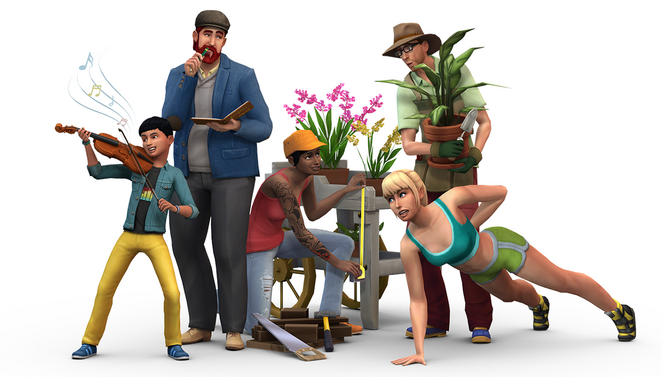 Skills are talents that Sims need in their everyday life and to advance in their working career.

In The Sims, only adults can earn skill points. In The Sims 2, The Sims 3 and The Sims 4, however, any age group from toddlers on up can gain at least some skills.

In The Sims 2, certain aspiration reward objects such as Smart Milk, the Thinking Cap, and the SimVac can also aid in the building of skills, as do the career reward objects which focus on one skill. All 7 main skills (Cooking, Cleaning, Mechanical, Logic, Creativity, Body, and Charisma) are covered by at least one object. If Seasons is installed, drinking a veggie cocktail will aid in skill building, and drinking eggplant juice will give a random skill point. All skill building is also boosted during the fall season. If a Souvenir Rack has five Far East Souvenirs on it, all nearby sims will build skills faster.

In The Sims 3, skills have been expanded, and something roughly similar to the talent badges from The Sims 2 has been worked into the skill system. Skills still have 10 levels of proficiency. Sims who have maxed out any skill receive a certificate which can be sold for §1,000 (price will drop after some time) or hung up proudly on their wall. The interface for The Sims 3 was redesigned, so that information about a skill, statistics and challenges can now be found in the skill journal. Additionally, classes in all the skills can be taken at various community buildings. Another difference from previous games is that Sims can learn skills on any lot. Previously, Sims could not gain skills on community lots, though some expansion packs for The Sims 2 had limited exceptions to this.

In The Sims 4, skills work similarly as they do in The Sims 3. Skills usually have the max level of 10, and unlike previous games, there is no "level zero" with skills. Instead, Sims will immediately start at level 1. After a Sim has started learning new skills, the information regarding those skills along with the statistics will be stored in the skills panel. As in The Sims 3, Sims can learn skills on any types of lots such as community lots, if the required conditions is met. Toddlers and children also have their own unique set of skills that are not available to teens and older. If a toddler has mastered all of their skills, the Sim will gain a special reward trait after aging up. If a child has mastered their skills, they can start learning normal adult skills, which will be transferred after aging up into a teen.

Skills and secret skills, including talent badges, learned in each game or expansion pack.

A few examples of skills that are needed in everyday life:

This section describes features that are only available in The Sims 2 and The Sims 3.

In The Sims 2, Sims of any age and aspiration may roll wants to gain a skill point or to gain a point in a specific skill. These wants are more common for Knowledge Sims, and Knowledge Sims may also have wants to increase a specific skill to a certain level, to maximize a specific skill, and to maximize all skills. These wants have higher values, and are also influence wants. Also, Fortune and Family Sims have a somewhat higher chance of rolling skill-related wants. Fortune Sims will frequently want to gain skills needed for promotion, while Family Sims will often want to gain cooking and cleaning skill.

Various challenges are also available in the skill journal. For example, in the painting skill journal, a challenge to paint thirty paintings is available. When completed, the Sim earns a reward of being able to paint significantly faster than normal Sims.

There are multiple skill challenges for each and every skill, as well as collections. All of them earn some kind of benefit, such as quicker completion, better results, etc.

There are certain rabbit holes where Sims can go to learn skills:

These lessons take a few hours to complete, and are available to children and older. The lessons may cost around 300 - 600 Simoleons. They are also a much more efficient way to train skills, due to their price. Sims can only be trained once for each skill. They'll need to use other methods (read books, practice, etc.) after the class.

Tip
If The Sims 3: Generations installed, children and teens can also learn skills from certain afterschool classes or field trips.