The Sims Wiki
Register
Don't have an account?
Sign In
Advertisement
in: Life states, Types of NPCs, Skeletons,
and 2 more
English 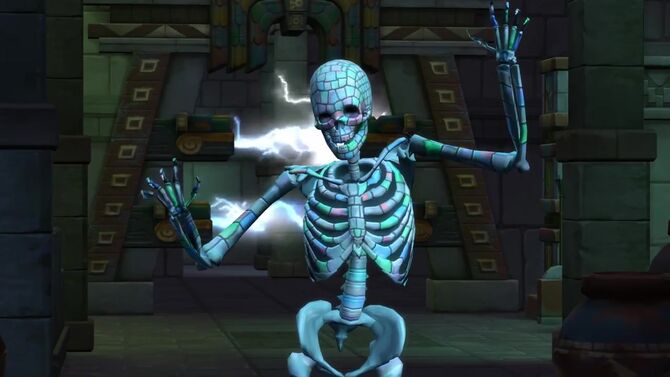 Skeletons are a temporary life state and summonable NPC in The Sims 4: Jungle Adventure. The NPCs function as temporary helpers that can do chores and look after children while their parents are away. Skeletons can be summoned through a rare relic and do not have bladder, hunger, energy and hygiene needs. Sims can become skeletons for two days through the use of a different relic. Skeletons may also spawn sometimes in the jungle temples in Selvadorada.

When a skeleton eats food, piles of food will spawn and if a skeleton drinks something, puddles spawn. They have special interactions like telling a skeleton joke or scaring a Sim.

With The Sims 4: Paranormal Stuff, Sims can summon Bonehilda the skeleton maid using the medium skill. Performing a "Ghastly Ritual" at a seance table also has a small chance of turning Sims into her for a short period of time.

It is possible to make a skeleton playable by using the cloning machine on one. Another way to make a skeleton playable is by enabling the testing cheats, shift-clicking on it, and then selecting the option to add it to the household. Either way, the added skeleton will have all skeleton features, except it will not be able to do special interactions like scaring or telling skeleton jokes. It will also have normal motives like other Sims. Trying to edit a skeleton will show it as a normal Sim, but no changes applied will be visible after exiting editing screen (except for a family screen picture, which also shows an added skeleton as a normal Sim). Skeletons added to the household in this manner are fully playable but may be removed from a family through a bug—using a relic to summon a skeleton helper can sometimes summon a playable skeleton, making it unplayable again and removing it from its family.

Added skeletons will have another glitch and will change their default colour (white, dark or blue, mosaic-like pattern) to another one from time to time. This becomes very evident when wearing earbuds.

Skeletons are able to catch fire, but cannot die from it.

Using mods,[which?] it is possible to unlock skeleton clothing in Create a Sim, which allows for a Sim to permanently possess all of the unique skeleton abilities. However, there are a number of glitches with Sims created this way: 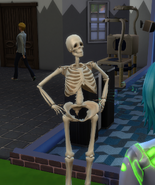 A skeleton servant summoned with the relic.