Skeet Bayless is a pre-made playable Sim who lives with his family in Twinbrook, the world introduced in The Sims 3: Ambitions. He appears to be outdoorsy like the rest of his family. He has long brown hair, is unshaven and wears camouflage clothing. He works as an Epitaph Writer at the Cemetery, and is at level 5 in the fishing skill.

He is married to Gwayne Bayless and is friends with both of his children, Chase and Tay, as well as with Oliver Greenwood. When Twinbrook is first played, he is 15 days away from becoming an elder. Skeet Bayless is mentioned in one of the object descriptions from The Sims 4: Movie Hangout Stuff. 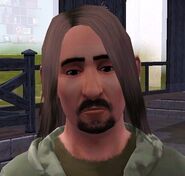 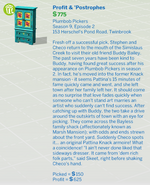 The object description in which Skeet Bayless is mentioned.
Nederlands Português do Brasil Русский
Community content is available under CC-BY-SA unless otherwise noted.
Advertisement