Sinjin Balani (סינג'ין Balani or Sinjin बलानी)is a character in The Sims 2 for PlayStation Portable. He is the cousin of Jenny Smith and the Curious brothers. Sinjin lives in the Kine Dairy and functions as the "herd leader" of the Kine Society. He leads the player through a number of tests before promoting them to a yearling. The Kine Society worships Beelzebeef, a huge cow, which is later abducted by Doctor Dominion, the founder of the Kine Society. The player discovers that the Kine Society is a hoax, but Sinjin decides not to break it to the other members, saying they have found peace with this lifestyle.

He does not appear in the PC version and it is unknown what side of the family he is from. It is only revealed that he is Lazlo's cousin. A popular fan theory is that he is related to the Curious family through Bunny Curious, who may be his mother or grandmother. However, this is purely speculation and has not been confirmed.

His name implies he may be both Hebrew and Indian.

Sinjin's secrets from The Sims 2 (PSP): 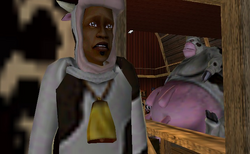 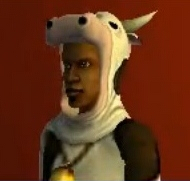 Add an image to this gallery
Retrieved from "https://sims.fandom.com/wiki/Sinjin_Balani?oldid=944483"
Community content is available under CC-BY-SA unless otherwise noted.