Sinbad Rotter is a young adult male Sim residing in Twinbrook. He is 17 days away from becoming an adult. Currently he works in the criminal career track. Given his personality, he has both the evil and mean spirited traits and he lives to hurt other people. Sinbad's first name--though actually a name--is also a play on words combining "sin" and "bad." His surname, "Rotter," is a British slang word for a deplorable person. Sinbad is enemies with his roommate, Goodwin Goode, likely due to their differences in personality. Sinbad wears a spiked choker and has many tattoos, possibly to show that he is a rebel. If left alone, Goodwin will probably leave Sinbad and live somewhere else due to their dispute.

Sinbad has three hidden skills: one point in the Hacking skill, two points in the Mooch skill (despite not having the trait), and one point in Tattoo Art. 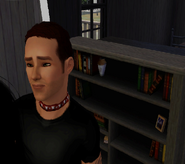 Add an image to this gallery
Retrieved from "https://sims.fandom.com/wiki/Sinbad_Rotter?oldid=918391"
Community content is available under CC-BY-SA unless otherwise noted.