Listen) family is a family which is less known about than many others. Betty Newbie is the daughter of Fatima and Vadim Simovitch, but that is not established until The Sims 2, when they appear in the family tree of their granddaughter Brandi Broke. Fatima and Vadim did not appear in The Sims, and it is not clear whether or not they were alive at the time. In The Sims 2, Fatima, Vadim, and Betty are all deceased, and only appear in the family trees of their living descendants. In The Sims 3, they live in Riverview. The family may be of Eastern and/or Central European descent.

In Roaring Heights, there is a very rich man named Henry Simovitch. He is an entrepreneur who made it rich in the automobile industry. His relationship to the family, if any, is unknown.

Simovitch: A combination of "Sim" and the slavic surname ending "ovitch", could mean "son of Sima" or simply "son of a Sim."
Fatima Simovitch : "Fatimid" - In North African and sometimes Egyptian and Syrian, from Fatima, daughter of Muhammad by his first wife, Khadija; Fatima married Ali, and from them the dynasty claimed descent.
Vadim Simovitch: Probably comes from the ancient Slavic word "Volod" - ruler.
Betty Newbie: Short for Elizabeth, meaning "God gave me an oath," in Hebrew. 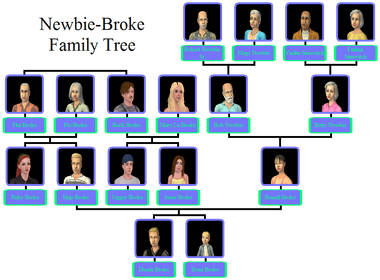 Retrieved from "https://sims.fandom.com/wiki/Simovitch_family?oldid=833156"
Community content is available under CC-BY-SA unless otherwise noted.