The Sims Wiki
Register
Don't have an account?
Sign In
Advertisement
in: Sims, Male Sims, Elders,
and 36 more
English

Simis Bachelor is one of the pre-created, yet unplayable Sims featured in The Sims 2 and one of the pre-created, playable Sims featured in The Sims 3. Though deceased when The Sims 2 begins, he can be seen in the family trees of playable Sims, Cassandra Goth and Alexander Goth, who are his grandchildren. He resided during his lifetime in Sunset Valley that ships with The Sims 3. He is the father of Bella and Michael Bachelor, and the husband of Jocasta Bachelor. His parents are Milton and Enriqueta Bachelor. His name may be a pun on "Sim is bachelor."

In The Sims 3, Simis is an adult living with his wife, teenage son Michael, and younger daughter Bella in Sunset Valley. He works in the Journalism career as a Professional Blogger and although he has the frugal trait, his lifetime wish is to "Live in the Lap of Luxury". He likes to spend time watching television.

His traits are neurotic, inappropriate, handy, frugal and family-oriented, which is quite strange because his aspiration is romance in The Sims 2. The decision to not make him like a romantic Sim was probably done by developers to fit his character more into the typical "father" role. Other traits are completely unique.

His appearance didn't change much in The Sims 3. He still has short hair, but without a fringe, and his hair is red with brown roots, rather than the grey it would be in The Sims 2. His clothes are similar to the clothes he wears in The Sims 2, wearing a brown cardigan, blue shirt with white stripes, and brown pants. He has dark grey eyes, instead of brown as in The Sims 2. He has 4 points in the handiness skill, and 4 points in the writing skill. When the family is first played, Simis is 11 days from being an elder.

By the time the storyline has caught up to The Sims 2, he is already deceased, as is his wife. His son died of old age shortly after marrying Dina Caliente, leaving his daughter, Bella Goth, and his grandchildren, Cassandra and Alexander Goth, as his only living descendants. He died in the elder stage, hinting that he could have died of old age; however, his grave is nowhere to be found. For that reason, his cause of death is unknown, as he has no ghost, and he can't be resurrected under normal circumstances.

Since Cassandra Goth has no memories of Simis and Jocasta's deaths, it is possible that they died around the time she was born. That would (retroactively) explain why they did not appear in The Sims. When viewing his SimDNA in SimPE, his genes are for brown hair.

According to SimPE, Simis had 19 days left when he died.

Simis and Jocasta Bachelor in the Pleasant Rest Graveyard 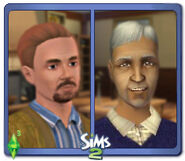