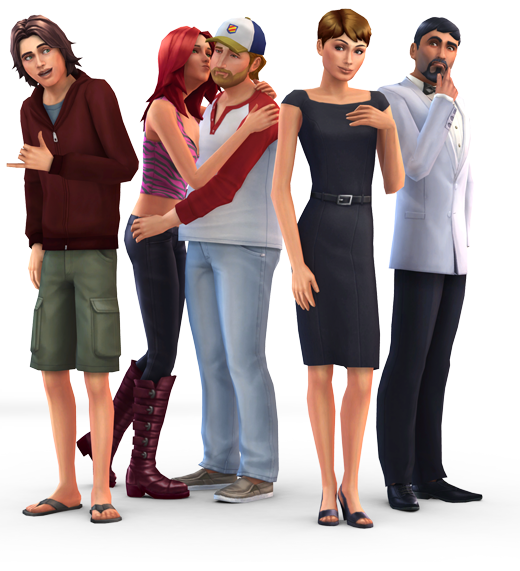 For the first game in the series, see The Sims.

For the series, see The Sims (series).

A Sim is a virtually simulated person. Sims are the primary focus of The Sims series, and are considered the main life state in nearly every game in the series.

Sims are complex creatures, capable of desires, fears, and physical and mental needs. Sims can have a unique appearance with different hair and eye colors, skin colors, body sizes, and more. A Sim's personality is equally as complex, with Sims having their own aspirations or traits, allowing for countless variations between Sims.

Sims live out their day-to-day lives, while also living out a full life cycle, stretching from birth to death. The progress of a Sim's life is inexorably tied to the decisions of the player; while Sims may be provided with certain amounts of autonomy, ultimately their lives are under the control of the player. This bond between player and Sim is symbolized by the Plumbob, which shows the Sim that is currently under the player's active control.

The evolution of Sims[]

Sims were first mentioned in the first edition of SimCity, but aside from little dots in the sports stadium, they were never seen. Their first known appearance was in SimAnt (1991); there was only one owner in the yard and the ant colony he lived upon. Players can also see a stray or wandering cat outside the yard that the dog frequently scares away.

Further interaction was given to the Sims in SimTown (1994), and was the base of many concepts that later went into The Sims. Among these was a very basic mood meter which only contained "sad" and "happy" and had relatively few factors that go into it. Players could choose certain Sims' favorite things (somewhat like Aspiration in The Sims 2), and could peer into all houses (only one floor could be revealed, however).

After that, no game quite got as close to The Sims as the game itself. However, Streets of SimCity (1997) introduced Simlish for the first time in the radio music. The first game with spoken Simlish was SimCopter (1996).

Sims are a bipedal, humanoid species,[1] found in SimNation. Most Sims are omnivores, however vampiric Sims exhibit hematophagy, and some Sims, who get sick from eating meat, exhibit vegetarianism[TS3][TS4CL]. Sims have four limbs: two arms and two legs. It is unclear how intelligent Sims are; although they have the ability to use tools and create works of art and technology, they lack direction and often require a guiding hand, that of the player, to manage some of the simplest of tasks. Sims tend to be social creatures, and can hallucinate if left alone for too long.

The characteristics of Sims (here called Urbz) in The Urbz: Sims in the City.

With the exception of alien-Sim hybrids[TS2], which are the result of genetics, Sim-hybrids are not possible. A normal Sim who is transformed to another life state ceases to be normal.

Sim as a Taxonomic Category[]

In The Sims universe, a normal Sim is categorized under the Human life state. This means that "Sim" as a category is something broader than a species. Witches are Sims who have gained the ability to use spells. A werewolf is a Sim who has two forms, and has the ability to switch between these. Vampires are Sims inflicted with a viral illness that grants them heightened abilities at the cost of needing nourishment from agents that are present in Human Sim blood. PlantSims are Sims who have acquired some qualities of plants, such as the ability to photosynthesize, and who therefore have different needs.

While Fairies, Genies, Bigfoots, Aliens, and Mermaids can be categorized as Sims, they are not humans, and are different species on their own. Speculatively, a Genie could be a purple-hued humanoid with the ability to manipulate spacetime, a Bigfoot could be a highly evolved ape on the cusp of sapience, Aliens could be a species that evolved light years away from the human Sims' planet, Fairies could be mischievous humanoids that affect nature.

Zombies are either dead Sims who have been partially restored to life, or Sims changed from a transformation. Similarly, ghosts are the spirits of dead Sims who are visiting from the Netherworld. Mummies are cursed Sims in a state which can be considered a derivative of Zombieism. Servos, SimBots, and Plumbots are considered as Artificial Sims.