Silvia Monty (née Capitano) is one of the pre-made, yet unplayable ancestral Sims that resided in Veronaville in The Sims 2, and reappears as a playable Sim in Monte Vista in The Sims 3: Store. She was the wife of Valentine Monty, the mother of Patrizio Monty, the grandmother of Bianca, Antonio, and the late Claudio Monty, and the great grandmother of Romeo, Mercutio, Beatrice and Benedick Monty.

In Monte Vista from The Sims 3 Store, Silvia lives with her deceased husband Valentine in Poetic Property at 718 Bella Vista Drive. Her son Patrizio lives in another house with his wife and children. She worked as a Division Manager before retirement. She has only four traits, which is unusual for a Sim her age.

Silvia's gravestone does not exist within Veronaville, so she can't be made playable without the use of hacks and mods like SimPE. As a result, the only indication of Silvia's existence is provided by the family tree of her descendants. Strangely, Patrizio, Silvia's son has a memory of her dying shortly after Claudio, Silvia's grandson, married his wife, meaning Silvia would have died as an elder, which may explain why there is hidden picture of her in SimPE showing her as an elder with a different hairstyle, meaning that she may originally have meant to have died as an elder. This happens with many more Veronaville Sims. Interestingly, despite appearing to have died as an adult, she died after her son Patrizio became an elder himself. 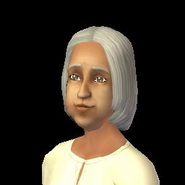 Silvia's elder hidden thumbnail, can be found with SimPE 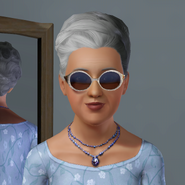 Silvia in The Sims 3
Add an image to this gallery

Retrieved from "https://sims.fandom.com/wiki/Silvia_Monty?oldid=934894"
Community content is available under CC-BY-SA unless otherwise noted.