The Sigworth family is a pre-made family residing in StrangerVille, the world introduced in The Sims 4: StrangerVille. It consists of Jess Sigworth, her husband Dylan Sigworth and their daughter Christie Sigworth. They live in the Riverside Grove lot and start off with 21,337 Simoleons.

According to the family biography, the Sigworth family has just recently moved in to StrangerVille, as Jess had to transfer to the StrangerVille National Base. However, a few days after Jess's transfer, Dylan has noticed something strange about his wife, who has gotten infected from something unknown. The daughter of the couple, Christie, while being reassured by her father that everything is fine, is starting to realize what's going on and only time will tell when she truly finds out about the strange behaviors of her mother.

The house of the Sigworth family, Riverside Grove, has a stack of papers in Jess and Dylan's bedroom which can be searched for evidence if the player chooses to pursue StrangerVille's mysterious story. 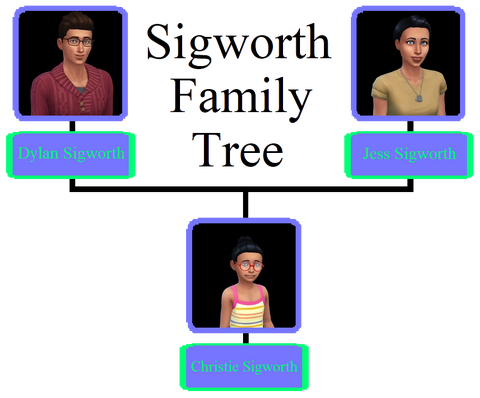 Retrieved from "https://sims.fandom.com/wiki/Sigworth_family?oldid=903106"
Community content is available under CC-BY-SA unless otherwise noted.