The Sims Wiki
Register
Don't have an account?
Sign In
Advertisement
in: Objects, Objects in The Sims, Mood-altering objects,
and 34 more 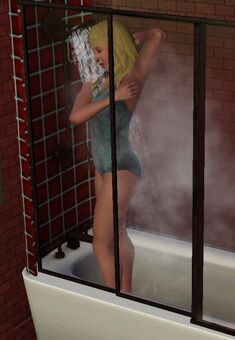 A shower is an object used by children and older Sims to improve hygiene. Taking a shower is usually more efficient than a taking a bath, as Sims will spend less time in the shower than in a bathtub.

A Sim who uses the shower may sometimes leave a puddle of water on the floor in front of the shower, which will have to be cleaned. Children will almost always leave puddles.

Unlike later games, Sims may walk into a room while a Sim is in the shower, although they will be shooed out once the Sim stops showering. The showering Sim will remain in the shower for a period of time waiting for all sims to leave the room but will step out after a period of time even if not all sims have left the room. Regardless, they will wait a while for all sims to leave the bathroom.

On Vacation Island, sims will shower and use the toilet in front of any sim regardless of relationship. This is most likely due to most campgrounds and bare bones lots having communial bathrooms that are not gender or age restricted. Players can make communial bathrooms gender restricted for either males or females but this won't stop opposite sex service sims or mascots such as Maid Marrion or Marky Sharky from entering the bathroom to clean or entertain. Vacationer sims do not use showers. Sims will shower, bathe or use the toilet in their hotel rooms without caring about privacy.

Messy Sims are more likely to create puddles while using the shower, although the puddles will not appear if there is not enough space around the shower for the puddles to form. In addition, messy Sims may also relieve their bladder motive while in the shower.

Sims will not enter a bathroom while a Sim is in the shower, unless they have a romantic relationship with them. They may still react in shock at the showering Sim's nudity. After showering, the showering Sim may lecture the Sim that walked in on them.

If a toilet in the same room as a shower is flushed, the Sim in the shower will scream from the changing water temperature, a common comedic trope. The showering Sim may later lecture the Sim that flushed the toilet.

Sims may sometimes receive a "Cold Shower" negative moodlet from using a cheap shower, or an "Exhilarating Shower" positive moodlet from using an expensive one. Sims with the required handiness skill can upgrade the shower to be self-cleaning or unbreakable. Generations adds the ability to WooHoo in a shower, and allows children and teens to booby trap the shower with hair dye.

Island Paradise, Movie Stuff and Into the Future include all-in-one bathrooms, which function as a combination of a shower and a toilet. Sims enter fully clothed, and they do not violate privacy.

The Sims 3 Store has outdoor showers, and Sims don't switch to their naked outfit while using them.

The entrance to the shower cannot be placed within one-tile directly across from any door.

Even though the object's footprint is 1x1, it requires an area of 2x2 tiles in order to be placed.

Your Secret is Safe Shower[]

Replaces regular shower with "Quickie Cleanse", which cleans Sims in their current outfit without others being shooed. This builds their advanced technology skill, with the low skill making them more prone to the object's post-use failure. A sim with level 9 advanced technology skill can upgrade the shower to unlock the "Power Cleanse" interaction, which increases hygiene faster and stops hygiene decay for 5 hours.

Unlike other showers, PlantSims[TS3:UL] can not use the sonic shower. Mermaids[TS3:IP] can use it, but they do not gain any hydration from doing so.

It's Not Gross Public Shower Station[]

Showers in The Sims 4 function similarly to those in The Sims 3 in that they can be upgraded to improve their stats. Sims can take different kinds of showers to elicit a certain emotion:

Sims can also take a cold shower when angry or flirty, which will revert their emotion back to the one they previously had. Sims that use a cheap shower may become uncomfortable. If Sims shower at a gym, they will change into a towel rather than their everyday clothing afterwards. Discover University adds the ability to WooHoo in most showers, in which case Sims will change into towels instead of their nude outfits. However, Sims cannot WooHoo in open showers (such as the "Almost InvisiShower 2.0" and the "In Or Out? - Outdoor Shower").

Outdoor Retreat, Spa Day, Discover University and Snowy Escape include showers which do not violate privacy for Sims aged young adult and older. Sims will not shoo other Sims away before using them, but they may become embarrassed if other Sims are in the same room. Some showers also remain functional when a lot is off-the-grid.

Like the "Strut Your Stuff Communal Shower" from The Sims 2: University, the "Almost InvisiShower 2.0" from Discover University and the "Steamy Times Shower" from Snowy Escape do not block access to anything placed around them, and Sims will walk right through them, allowing for more compact bathrooms.