A shell building is a buydebug object, that serves as a large fixed-exterior that acts as shelter. In practice, they're used to give a complex yet aesthetical architecture look, that would otherwise be impossible to create. Because of their varying size, some come with a fixed height and are useful for alluding persistent size that is the interior.

Anything that's within a shell (an object, wall segment and flooring) can only be modified with RestrictBuildBuyInBuildings cheat enabled.[1][2] However, creating a smaller interior and utilizing hidden room markers for outer halls is completely optional. All shell buildings are fixed with their own entrance doors. 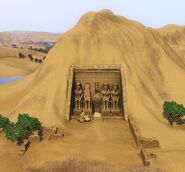 The Great Pyramid in Al Simhara 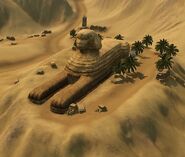 The Great Sphinx in Al Simhara

Pyramid of the Burning Sands in Al Simhara

Pyramid of the Sky in Al Simhara

Pyramid of the Wind in Al Simhara 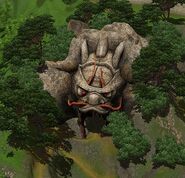 Skyscrapers are shell buildings that were shipped with The Sims 3: Late Night.[3] They are "Shell buildings"[4] and only offer one or two floors (such as the basement; some nicer penthouses have a second floor bedroom.) as a playable area for either residential penthouses or community lots, such as bars.[5] This is the first time in the series that a skyscraper can be made without the use of cheats, though they were available as neighborhood decorations in The Sims 2: Nightlife and The Sims 2: Apartment Life. Skyscrapers can be placed in build mode, though, as with any rabbit hole, it has to be placed before a family moves in. Although many shells can be obtained from the buydebug catalog, some of them are unroutable due to broken door entrances.[6]

Shell buildings are present in the expansion introduced Starlight Shores world. However, not all of them are available in the build mode section of buydebug. Based of the examinations of modifying few of these buildings, all can possibly hold the maximum of five story height with a flat roof on top.

The Sims 3: Into the Future[edit | edit source]

The Erutuf in Oasis Landing
Add an image to this gallery

Skyscraper shell buildings return in The Sims 4: City Living. They are more often seen as high story apartment buildings and usually have one to four apartments in them, though some of the skyscrapers also have a penthouse on top. Some of the buildings are mostly one-story, but there couple that have two stories. These skyscrapers can not be moved, edited or placed into another world by the player and are only found in San Myshuno.

Apartment buildings in Arts Quarter.
Add an image to this gallery

Retrieved from "https://sims.fandom.com/wiki/Shell?oldid=910094"
Community content is available under CC-BY-SA unless otherwise noted.