Sheila Deadbones is a pre-made female Sim that is deceased at the start of The Sims 2 for consoles, and resides at Sunset Canyon in Strangetown with Helga Mandrake, Billy Specter and Red S. Hirt. She shares a +20 relationship with all her roommates, though, Billy and Helga's relationship list states they have a neutral 0 relationship. According to her and Helga's bio, she could have had a part in Helga's death.

She was an actress who died in an unfortunate accident. Since her youth, she has been a pirate. 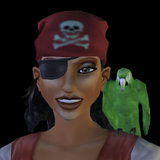 Sheila Deadbones Headshot
Add an image to this gallery
Retrieved from "https://sims.fandom.com/wiki/Sheila_Deadbones?oldid=918896"
Community content is available under CC-BY-SA unless otherwise noted.