Sharlene Royce is one of the pre-made NPC Cuisine Hobby instructors who comes from Hobbies, the secret sub-neighborhood introduced with The Sims 2: FreeTime. The other two cuisine hobby instructors are Kana Phillips and Warren Owens. She appears in every neighborhood once FreeTime has been installed. Sharlene can be made playable by befriending and asking her to move in, or by marrying her.

She has long curly black hair, brown eyes, and dark skin. Sharlene is a Family Sim with the Aquarius zodiac sign. As far as personality, she is quite playful and somewhat nice. But Sharlene is somewhat sloppy, shy, and lazy. She is mostly interested in Weather, Money, Paranormal, and Sports. Sharlene has the same facial structure as Lucy Hanby, from Pleasantview.

Even though her default head-shot depicts her with long curly hair, and wearing a pink patterned halter top, when Sharlene is first spawned in-game, she will have medium-length hair in a ponytail, and an NPC chef outfit and hat. However Sharlene will still retain the hairstyle in her default thumbnail, for most outfits besides everyday. Even though she is a cuisine hobby instructor, she isn't interested in Food. Also Sharlene's pre-destined hobby is Sports.

Sharlene Royce on the street. 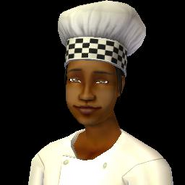 Sharlene Royce's appearance in-game.
Add an image to this gallery
Retrieved from "https://sims.fandom.com/wiki/Sharlene_Royce?oldid=838548"
Community content is available under CC-BY-SA unless otherwise noted.