"My toys are hot, hard, vibrating and covered in leathers... and they're street legal!"

Sharky Splitz is an Urb residing in Urbzville's district, Gasoline Row. She is a beauty and a beast who's a cool contrast of love and leather. She wears a police hat, chaps, and has short hair. Most players have noticed if you flirt with Jet Rockit whilst she's in the room, she will sometimes slap or insult you. Whether or not this is a glitch is unknown.

She likes the rough stuff, Full-length chaps, and Rose tattoos. She dislikes Vinyl, Dresses and pantyhose, and Overcooked bacon. If the protagonist is given a mission by Cash Monet, he will want a XAMShot of her.

In comix the "Outlaw Angst" by Peter Bagge, she and Suzie Mack are seen arguing with Jayde about manning the sausage grill, emphasizing that she isn't going to be the one to do it. When Jayde tries to get on Duke's good side, Sharky reacts and threateningly tells Jayde that she had her eye on Duke. At that moment Jayde "Body Slams" Sharky who takes it surprisingly well, even asking if Jayde could be her friend.

When Jayde soups up a bike, she states the results to be gnarliest bike she had ever seen. When the newbie leaves, Sharky admits that she, herself, isn't as tough as she appears. 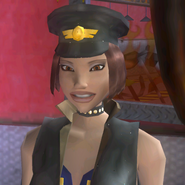 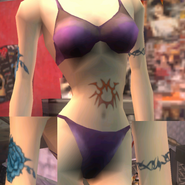 tattoo reference
Add an image to this gallery
Retrieved from "https://sims.fandom.com/wiki/Sharky_Splitz?oldid=903102"
Community content is available under CC-BY-SA unless otherwise noted.