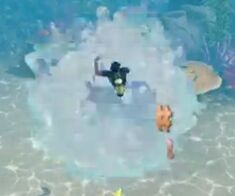 A Sim being attacked by a shark in The Sims 3: Island Paradise.

A shark is an aquatic animal that appears in The Sims 3: Island Paradise and The Sims 4: Island Living.

Sims may encounter sharks on the surface or while they are diving in a dive spot. These sharks are different than those encountered underwater. Sharks will only appear on lots that have a shark spawner. By default, only Isla Paradiso has pre-placed shark spawners, so players need to manually place shark spawners themselves. There are 4 types of shark in the game, which are the blacktip reef shark, tiger shark, lemon shark, and great white shark.

When a Sim notices a newly spawned shark underwater, they may wet themselves if their scuba diving skill is lower than 7. Sims can hide in an underwater cave to avoid sharks. There is a 5% chance that sharks may attack Sims, an additional +2% chance for each meat and fish inside the Sim's inventory, and an additional +20% chance if the Sim watches the sharks. When a shark attacks the Sim, the chance to win the fight is based on how many skill points the Sim has in athletic, martial arts,[TS3:WA] and scuba diving skills. Having 0 of them will guarantee a loss while having 10 of each will guarantee a victory. If the Sim has the loves to swim trait, there's a +30% chance they will win the fight.

If the Sim loses the fight, they will get the "Mauled by Shark" and "Gasping for Air" moodlets. If the Sim is attacked while having either of these moodlets, they will die by shark attack and the ghost of the Sim will be purple. If the Sim wins against the shark, they will receive a shark tooth and get the "Pumped" moodlet.

Mermaids cannot be attacked by sharks, since they're friends with all sea creatures, which also includes the Kraken. Mermaids with the evil trait can summon sharks.

Sharks coming to the surface 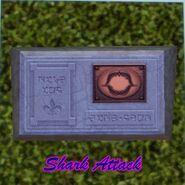 The gravestone of a Sim who died by a shark attack

The ghost of a Sim who died by a shark attack

Sims may encounter sharks while swimming in the ocean around Sulani. When they come back to the surface after searching for treasure, sea shells, taking underwater pictures etc. on the diving spots marked by buoys, the Sim sometimes receives a frightening moodlet, saying they have seen a single dorsal fin approaching them. The actual fin can be seen above the water, but there won't be any rest of a shark model visible under the surface.