The Sims Wiki
Register
Don't have an account?
Sign In
Advertisement
in: Worlds in The Sims 4, Jungle Adventure, Selvadorada
English 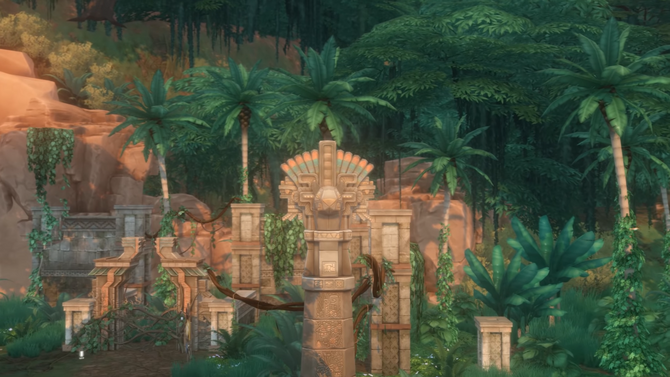 Selvadorada is a destination world in The Sims 4: Jungle Adventure. It is based on the Latin American region surrounded by vast expanses of jungle and hidden ruins to explore, with a small settlement in which Sims can interact with locals, try out food or purchase adventure gear.

Selvadorada contains landmarks of the ancient Omiscan civilization, which had lived in the area a long time ago. In the jungle there are various hidden ruins of the Omisca, such as temples, baths and various other spots overgrown in greenery, full of Omiscan relics and culture. The indiginous architecture of the world resembles the styles of Mesoamerican civilizations, while the marketplace seems to be based on Spanish colonial architecture. It's also said that Madre Cosecha is the founder of Selvadorada, who helped the people settle the place during a time of great famine.

It's literally a jungle out there! Don't forget to bring your spider repellent and machete!

The more you explore, the more secret ancient rooms open up for discovery

Find, purchase, and collect ancient artifacts so you can bring a piece of the jungle home with you

Selvadorada consists of 2 neighborhoods. The Jungle District is part of Belomisia Jungle and is not accessible from the map. It requires adventuring and clearing paths to get to it.

There are a total of 7 lots in Selvadorada.

Even with The Sims 4: Seasons installed, Selvadorada does not experience four distinct seasons, as temperatures never fall below warm. Spring, fall, and winter involve more rainfall and warm to hot temperatures, while heat waves are common in the summer and rain is not. It never snows unless a weather-controlling machine is used.

A crashed plane in Belomisia Jungle.

The statue of Madre Cosecha in marketplace.

A Sim getting chased by bees in the ruins of Selvadorada.