The Sims Wiki
Register
Don't have an account?
Sign In
Advertisement
in: Types of lots, University, Lots, Discover University
English 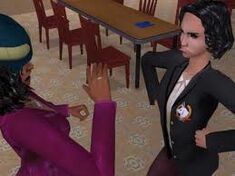 While a Sim is on a secret society lot, the telephone menu is restricted. If Open for Business is installed, the "Real Estate" option will be available. Otherwise, the only available option is "Go Home", which calls the limo to take the Sim back home. A Sim who is on a secret society lot will be able to declare or change majors by using a computer, but not by using a phone.

Refrigerators also operate differently on a secret society lot. They are always full, but the society will be charged whenever food is taken from them. They will not have the "Make..." option, even if that option is available on other lots, so Sims will not be able to bypass the breakfast/lunch/dinner menus. However, it appears that hamburgers are available at any time of day on a secret society lot.

If Nightlife or later is installed, the player is able to access a Sim's inventory, so it is possible for the playable Sim to take objects on the Secret Society lot home with them. Also, objects in the playable Sim's inventory can be placed on the lot. If Open for Business or later is installed, doors can be locked, though they normally cannot be locked on community lots. If Seasons is installed, the season on the secret society lot will not change with the season on the visiting Sim's home lot.

Only young adult Sims can join a secret society. In order to join a secret society, the playable young adult Sim must become friends with at least three members of the secret society. Members sometimes wear a black blazer with a llama emblem on the front, but may also wear ordinary clothes. Keep in mind that the three friends do not necessarily have to be members of the original (i.e. pre-generated) secret society, playable Sims that join count towards the three friends as well. Once a Sim has befriended three Sims in the secret society, they will be arrested some time between 11pm and midnight by one of the police officers in a black Llama blazer (not a member of the secret society as one might think). The Sim to be arrested will stop whatever they are doing and wait for the officer. If the officer cannot get to the Sim, the scenario will be interrupted and the officer will leave. Even the "jockeying for position" that Sims sometimes do before they interact is enough to interrupt the scenario and cause the officer to leave. Only one Sim per household can join the secret society per day, so if a household has two Sims that meet the requirement, only one will be taken.

For each of the pre-made universities, the game generates what is essentially the same group of characters, wearing the same "everyday" clothes, to be in the university's secret society. Like all other university townies, they will have randomly generated names. Additional townie secret society members are created if too many of the initial ones are made playable, killed off, etc.

Initially the Volauvent Society of Académie Le Tour has 7 members, three of whom wear blazers; the Landgraab Society of Sim State University has 10 members, none wearing blazers; and the LFT Society of La Fiesta Tech has 15 members, only one of whom will wear their blazer all of the time.

Some players have observed that, in a custom university with a secret society, the initial members of the society will look like the ones from Sim State University, but members of the other secret societies may be among them as well. Rather than being those Sims with yet another set of randomly generated names, they will be different Sims with different personalities.

Once a Sim has joined the Secret Society, he or she can return to the lot by using a phone and choosing "Transportation...Go to Secret Society".

If the player enables the testing cheats, any young adult or older Sim can be turned into a secret society member by selecting them, shift-clicking on them, and then selecting the "Add to Secret Society" interaction.

Secret societies make a return in The Sims 4: Discover University. The Order of Enchantment is dedicated to appeasing and entertaining the Sprites.