The Sims Wiki
Register
Don't have an account?
Sign In
Advertisement
in: Types of lots, The Sims 2, The Sims 4,
and 2 more
English

For the lots hidden from Map View in The Sims 3, see Hidden tomb.

Secret lots are featured in The Sims, several expansions for The Sims 2, and The Sims 4 as lots that are hidden from the neighborhood view, and generally only accessible to Sims upon meeting specific requirements or carrying out a specific action. The Sims 3 features the Hidden tomb lot assignment which hides the lot from Town View and prevents Sims from autonomously routing to the lot, but these lots are otherwise accessible at any time by player-controlled Sims.

The Sims contains two unused lots that cannot be accessed without modifying the game files, House00 and House11. Both lots are large and completely empty, missing even the invisible objects and portals required for the lots to function correctly. House11 can be seen in pre-release screenshots of the game, containing a large and complexly designed house.

Sims can climb a beanstalk that has grown to full height. They will be transported to a cloud with a giant Will Wright sleeping next to a spilled can of Magic Beans, which can be stolen. The sleeping Will Wright cannot be woken or interacted with in any way, but Sims can view him which will display a thank you message for playing The Sims.

Sims can return home from the clouds by interacting with the beanstalk.

Sims at college gain access to the Secret Society Club House when they befriend three or more members of the Secret Society. This lot contains a variety of career rewards and aspiration rewards. Each campus has a different Club House. After gaining membership, the Sim can go to the Club House anytime they want by using the phone.

Maps can be found by digging or taking tours on vacation in The Sims 2: Bon Voyage, and they can lead to a secret lot in each of the three exotic locations. Each lot is home to a unique NPC character. The hidden lots are not editable in any manner without modifying the game files.

Each of the 10 Hobbies in The Sims 2: Freetime has an associated secret lot, containing objects that relate to the hobby and allow Sims to increase their skills (unlike regular community lots). Sims can gain membership to a Hobby Lot by passing Level 5 in Enthusiasm to the associated hobby. There, Sims can interact with other Sims who share their hobbies, perform hobby-related activities, and can raise their skills. The hobby lots are not editable in any manner without modifying the game files. 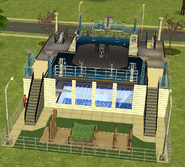 In The Sims 2: Apartment Life, a secret neighborhood called Magic is added. It is only accessible by witches. There are two lots where Sims can meet the head witches, buy reagents from them, and use their thrones, cauldrons and spell books. Although each lot is themed to a specific alignment, there are no restrictions as to which lot witches can visit. Additionally, although not a secret lot, Belladonna Cove contains an intentionally hard to find residential lot called Watervista Palace, modelled on Baba Yaga's hut. A Baba Yaga reference appears later in The Sims FreePlay, where Baba Yaga occasionally appears on the influence island.

The Sims 4 features secret lots which can be accessed through specific interactions with certain objects. Once visited, the secret lots can be travelled to directly from their portal. Sims with Level 7 wellness skill can teleport to the secret lots while meditating if they have previously visited the lot.

Willow Creek's secret lot is Sylvan Glade, and it can be travelled to through interactions with the Sylvan Tree located in Foundry Cove, adjacent to the Crick Cabana lot. In order for the portal appear, a Sim must first "Water" the tree, then "Compliment Leaves" and then "Talk". Entering the portal triggers a text adventure, which must be completed in a specific manner in order to travel to the lot. Sylvan Glade is a unique world that contains numerous plants, logs to search for Frogs, and a pond containing the rare Treefish, which can only be caught in Sylvan Glade. It's required to complete the Fish collection.

Sylvan Glade is always safe for vampires to visit because it is in perpetual twilight.

Oasis Springs' secret lot, called Forgotten Grotto, can accessed through an abandoned mine entrance found behind Desert Bloom Park, and Affluista Mansion. Each of the entrances requires Handiness of level 10 to be pried open, and become accessible. Similar to its Willow Creek counterpart, Forgotten Grotto has a text adventure that has to be completed before you can proceed, and the place contains a lot of Rocks to complete your Fossils, Metals, Crystals and Elements collection. It also has a unique fish, the Batfish, which can only be caught there and is required to complete the collection.

The Forgotten Grotto is always safe for vampires to visit because it is in a cave and sheltered from the sun.

Granite Falls' secret lot is called Hermit's House and can be accessed via a shrub hole in the forest surrounding Granite Falls Forest. Hermit's House contains a lake next to a waterfall with a fishing spot along with exclusive fish. The place also includes rocks, where Sims can collect crystals and metals, and special insects exclusive to the secret area. The hermit is also located here, whom Sims can talk to.

Aliens can be found inhabiting Sixam, and three unique kinds of otherworldly flora can be found and harvested. Two new crystals and metals can only be found on Sixam, the former of which can derive a new Element. There is also a six-piece collection of Geodes which can exclusively be found on the planet, which give Environment boosts when placed in a house.

Sixam is always safe for vampires to visit because it is too far from the sun and in perpetual night.

The Magic Realm is a secret lot included in The Sims 4: Realm of Magic. Sims and spellcasters can travel to this realm by a portal located in Glimmerbrook, alternatively all spellcasters are given an object known as the Glimmerstone which grants teleportation to the realm where ever they are.

Spellcasters and other magical enthusiasts can be found inhabiting the Magic Realm, particularly the three sages. The Magic Realm mostly comprises of floating islands with portals to connect them.

Due to the realm being within a void that is outside normal dimensions, there are no seasons or weather.

Mt. Komorebi Peak is a secret lot included in The Sims 4: Snowy Escape. This lot can be found by successfully completing a mountain expedition in the Yukimatsu neighborhood of Mt. Komorebi.