Scrubs De Reve is a Sim who made his first appearance in The Sims 4: Get to Work. He appears in several trailers and other merchandise for the game. He can be found in the Gallery and can be downloaded from Maxis profile either individually[1] or together with seven other sims in the Malpractice household.[2] In the Malpractice household, Scrubs' last name is "DeReve" instead of "De Reve" and he is not wearing a shirt.

Scrubs appears in many trailers and renders for Get to Work. He also appears on the box art of the expansion pack with Naomi Foye and Sierra Moss. Together with Chuck Cenzo, Charlie Francis, Kai Kahue, Dillin Derito, Chris Foley, Bjorn TuRok, and Eric Lewis, he appears in the Malpractice trailer and household. 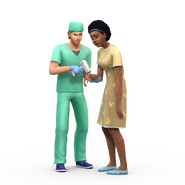 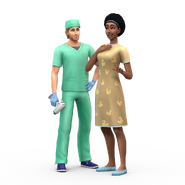 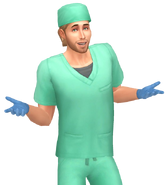 Retrieved from "https://sims.fandom.com/wiki/Scrubs_De_Reve?oldid=900603"
Community content is available under CC-BY-SA unless otherwise noted.