Scott Staunch is a pre-made repo-man who lives near Starlight Shores. He doesn't have any skills and relationships at the start of the game. He can be made playable by marrying him, or by befriending and asking him to move in. His female counterpart is Etana Kabul.

He and his female counterpart do not have the evil, mean spirited, or inappropriate traits, unlike other repo-men introduced in previous games. 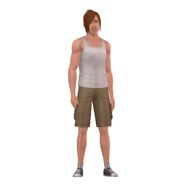 Scott's everyday clothing
Add an image to this gallery
Retrieved from "https://sims.fandom.com/wiki/Scott_Staunch?oldid=907858"
Community content is available under CC-BY-SA unless otherwise noted.