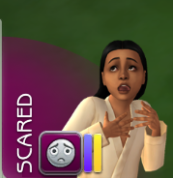 Scared is an emotion available in The Sims 4, which was added in Patch 107.[1]. It occurs when Sims are frightened by creepy situations or Sims, such as ghosts or vampires. Over 60 tense moodlets across the base game and various content packs have been converted to scared moodlets, where appropriate. This emotion can evolve into terrified.

Sims will only have a chance to use these interactions and do these activities while scared.

Sims will only have a chance to use these interactions with a scared Sim. 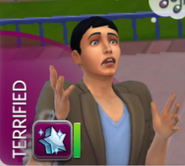 A sim made Terrified via cheats.

A scared Sim hiding under their covers.