The Sims Wiki
Register
Don't have an account?
Sign In
Advertisement
in: Objects, Objects in The Sims 2, Special items,
and 4 more
English

A satellite is an object that can kill Sims in The Sims 2. They are also mentioned in The Sims 3, but are much less involved, with the death being replaced by falling Meteors instead with similar effect.

When Sims look at clouds or stargaze on the ground, there's a 1% chance they will be struck and killed by a falling satellite.[1] If the check is true, the satellite will fall after 5 to 24 animation cycles, where in every 3 cycles, a thought balloon will appear on a Sim's head. If Sims quit the interaction before the satellite falls, the death will not occur.

The game only checks whether the death will occur or not at the beginning of the interaction. Due to this, looking at clouds or stargazing longer than 24 animation cycles will not increase the chance of dying. Sims will have to repeat the process from the beginning until the 1% chance condition is met.[2]

When a satellite falls, it can be sold in buy mode for §1,999, but the price depreciates rapidly, so it is best to sell the satellite immediately. Being crushed by a satellite is one of the two ways a Servo can be killed.

In The Sims 3, Sims can spot satellites, among other astronomical features, while using a telescope to raise the logic skill. Sims report their discovery remotely, name it, and thus earn a few Simoleons. Other Sims can spot pre-discovered satellites while stargazing. Satellites cannot kill Sims in The Sims 3. 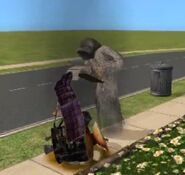 A Satellite after a Sim's death. The Grim Reaper approaches to take the deceased Sim's soul