The Sims Wiki
Register
Don't have an account?
Sign In
Advertisement
in: Sims, Male Sims, Adults,
and 29 more
English

Article Cleanup
This article requires a cleanup to meet The Sims Wiki's quality standards.
Reason: Formatting -> templates
Please improve this article if you can.

"Watch as your Sims count down the calendar days until Winterfest, where presents are gifted, decorations are hung, and Father Winter pays a visit."[1]

During a holiday with the Father Winter tradition he appears at a fireplace or simply comes through the front door if no fireplace is present. He will add presents to gift piles and decorated trees. Sims can also fight him for presents. The description for the fighting interaction reads:

"You could try to get gifts by asking... OR you could just beat up Father Winter and take them! But beware! He might not like you after this, and do you really want to be on Father Winter's bad side?"

Father Winter possesses the hidden trait trait_HolidayTradition_FatherWinter that renders him immune to death in any form.

If a Sim has a child with Father Winter, the child will get the "Father Winter's Baby" trait. Its description hints at magical abilities the baby might have.

He might be an allusion to "Ded Moroz", a Slavic fictional character that originates in Russia. His name translates to "Old Man Frost", "Grandfather Frost" or, in other languages, simply "Father Frost". When added to the relationship page, his name is usually Clement Frost. He may sometimes generate with a randomized name. 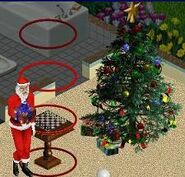 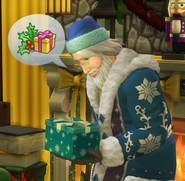 Father Winter in The Sims 4.