In the series, every Sim is technically bisexual, as they can be directed to have a crush on, fall in love with, engage in romantic interactions and WooHoo with a Sim of either gender, provided they are of the appropriate age group(s).

In The Sims 2, while editing a Sim in SimPE, a preference scale for males and females, can be found.[n 1] This was carried forward into The Sims 3, but is not as accessible. When first played, most Sims either have a completely neutral preference or a slight preference for (or rarely against) one gender. A Sim's preference scores gradually change as he/she interacts romantically with other Sims during gameplay. Therefore, a Sim's gender preference is fluid rather than fixed.

The Sims 2: Nightlife introduced a system for chemistry between two Sims, which is present in all later expansion and stuff packs for The Sims 2. While gender plays no intrinsic role in the chemistry between two Sims, it is possible to mildly influence a Sim's gender preference by choosing facial hair (only available to males) or make-up (available to both sexes, but very rarely worn by male pre-mades) as a turn-on or turn-off.

Possibilities for Sims in same-sex relationships[]

In The Sims, same-sex couples can move in together, but cannot marry. However, marriage is not a recognized state in the game, only a brief social interaction, and no formal relationships exist between Sims. Therefore, once the "Marriage" or "Move In" interaction is completed, the game no longer distinguishes between gay or straight couples.

All households containing two or more adult Sims can occasionally receive a random phone call asking them if they want to adopt a baby. Due to the lack of formal relationships between Sims, any adults living in the household can then be regarded as the adopted baby's parents, at the discretion of the player.

In the console spin-off The Urbz: Sims in the City, there is a mission that actively requires the player character to become involved in a love triangle with a male and female Urb, though the player may choose one over the other.

In The Sims 2, there is the option of formalizing any romantic relationship, but with different titles for gay and lesbian couples (Joined Union) and straight couples (Marriage). Same-sex couples can go steady with one another and get engaged in the same way as opposite-sex couples.

All adult and elder Sims who have not lost a child to the Social Worker can adopt by using the Call... Services option on a telephone. If the Sim who calls the adoption agency is married or joined, their partner will be considered the co-parent of the adopted child, and will receive a line on the family tree. Members of a joined same-sex couple may roll a want to adopt.

When interacting with the Gypsy Matchmaker, Sims are given the option to choose a male or female date, regardless of their gender preference.

In The Sims 2 for PSP, it is very difficult, if not impossible, to complete the game without forming romantic relationships with both male and female Sims. This is because one of the main ways of generating currency and furthering quest objectives in the game is by revealing secrets, around 1 in 5 of which are only accessible after attaining a Level 4 romantic relationship with a new character. Interestingly, jealousy does not seem to play a role in this spin-off, and the player character is actively encouraged to form romantic attachments with literally every Sim they encounter to unlock all secrets in the game.

The Sims 3 and The Sims Medieval[]

In The Sims 3 and The Sims Medieval, marriage is available to any couple in a romantic relationship, and Sims of either gender will recognize their spouse as "husband" or "wife". As in The Sims 2, same-sex couples can go steady with one another and get engaged in the same way as opposite-sex couples. If Generations is installed, two teens of the same sex may autonomously go to the prom together as dates. If Showtime is installed, wishing for love from the Genie will result in a dialog box giving the Sim the option to choose the gender of their prospective lover.

If Into the Future is installed, couples can travel to the hospital in Oasis Landing and pay §5,000 to engineer a baby together that will be the biological child of both, regardless of the sexes of the parents. This was the first time in The Sims Series that same-sex couples have been able to have biological children. Aside from the genetic resemblance, engineering a baby still functions more like an adoption than a pregnancy, in that the child arrives instantly and there is no gestation period or option to carry the baby like in a natural pregnancy (even if one or both of the parents are female).

In The Sims 3, all young adult, adult, and elder Sims who have not lost a child to the Social Worker can adopt by using the "Call for Services" option on a telephone. If the Sim who calls the adoption agency is married, their partner will be considered the co-parent of the adopted child, and will receive a line on the family tree. Adoption is not available in The Sims Medieval.

In The Sims 4, marriage is also available to any couple in a romantic relationship, and Sims of either gender will recognize their spouse as "husband" or "wife".

In The Sims 4, all young adult, adult, and elder Sims can adopt by using the interaction "Household... Adopt", which will cost them §1,000. If the Sim who calls the adoption agency is married, their partner will be considered the co-parent of the adopted child, and will receive a line on the family tree.

Dela Ostrow and Mia Hayes, who are girlfriends, on the updated cover of The Sims 4. 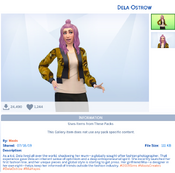 Dela's bio in the Maxis Gallery. 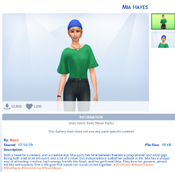 Mia's bio in the Maxis Gallery. 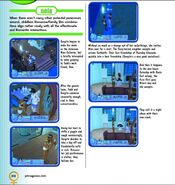 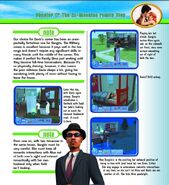 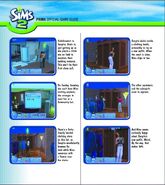