Samantha Kat is the second oldest cat (two days younger than Mickey) in the Kat Family, which appeared in the Pets expansion pack of The Sims 2. Her owner is Tara Kat. Her memories suggest that she was adopted soon after Mickey but before Faline. Her biography suggests she led a sheltered life, which could explain her three memories. The Kat family bio implies that Mickey and Samantha used to belong to Tara's mother.

Samantha is a short-haired Bengal cat with a tawny coat and sable spots. She also wears a black, buckle collar. It is suggested she is the daughter of Waggles Kat, the oldest cat of Tara Kat's mother, Ginia Kat.

Her learned command is "Come Here". Her personality is Genius-Doofus, Aggressive-Cowardly, Hyper, Independent, and Finicky.

However, Samantha is somewhat disobedient. She is disruptive and she will eat any food she can find, Sim food or pet food. 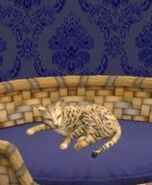 Add an image to this gallery
Retrieved from "https://sims.fandom.com/wiki/Samantha_Kat?oldid=894577"
Community content is available under CC-BY-SA unless otherwise noted.