The Sims Wiki
Register
Don't have an account?
Sign In
Advertisement
in: Sims, Female Sims, Adults,
and 20 more
English

Samantha Hayden (previously Cullen) is a pre-made playable adult Sim from Bitville, one of the neighborhoods shipped with The Sims Life Stories. She serves as the main antagonist for Vincent's story. Samantha pops the question to Vincent Moore too soon, even buying a wedding arch. Vincent abruptly refuses, angering Samantha.

She next appears with her new boyfriend, Johnny Cullen at Baliwood Star Lanes where Vincent is playing pool with his friends Greg Chomsky and Sherman Boggle. Wanting to make Samantha jealous, Vincent flirted with three women but gets rejected by all of them. Samantha then laughs at Vincent and leaves.

Samantha next appears at Cliffside Park where Vincent is having a date with his new girlfriend Naomi Hunt. She is accompanied by Kendra Blaise, a woman who Samantha convinces to pretend that she had been on a date with Vincent, so Kendra says to Vincent that she had a great time with him the previous night. Naomi then storms off, tricked into believing that Vincent is a womanizer.

Samantha next shows up at Don Calamari's where she sneaks into the kitchen and sabotages the food to make Vincent's new date Alexa Starr fall asleep in it while eating. After she wakes up, Alexa is embarrassed by the whole situation and she decides to leave the restaurant. After Vincent reconciles with Naomi, Samantha sneaks into Vincent's house and destroys his stereo.

Vincent later receives a message from Sherman who says that Samantha and Johnny are soon to be married. Vincent decides to invite Samantha over and make sure that she's not doing that just to get under his skin. After she comes, they talk and then argue. As a result, Vincent decides to kick her out of his house. Samantha refuses to leave; instead of it she breaks a few things in Vincent's house. She also causes a fire and then leaves.

Vincent receives a call from Naomi who invites him to Arcadium Plaza. After meeting her there they kiss each other but then see Samantha and Johnny there. Vincent tells Samantha that she should stay away from him and Naomi but Samantha insults him and they start to argue. Soon, Johnny joins the conversation. Vincent pokes him and attacks him. Naomi also attacks Samantha. Vincent and Naomi win the fight and as a result, Samantha and Johnny leave.

Samantha eventually marries Johnny, who is also Vincent's business rival. Her "dream" marriage is short lived however, as they have divorced right after Johnny's business fails by the end of the story. Ironically despite the story-line implying that Samantha and Johnny were married but got divorced, neither of them have memories of getting married or divorced.

Samantha moves back into her own home, which is 19 Second Street, after her divorce with Johnny and becomes playable from there at the end of Vincent's story. The house is barely furnished, because of the recent moving. Despite the story indicating she lived somewhere else while being with Johnny, it is left unclear where.

When the household is first played, she is 28 days from being an elder. She has the Romance aspiration and the Scorpio zodiac sign. Despite her lifetime want, Samantha isn't interested in Food. She starts with a preset gender preference of +10 to males and -10 females, that will only grow stronger due to story-dictated romantic interactions with Vincent and Johnny. She was the first Sim created in Bitville, and is technically the fittest Sim in town; her fitness bar is at 4.8, instead of 5 or 10 like all other Sims. She starts with no skills, like all playable Sims aside from Vincent and Naomi, but rather uniquely has progress towards her first Body point at 0.57. This may explain why she is slightly fitter than other Sims, she may have autonomously used an exercise item during development testing. 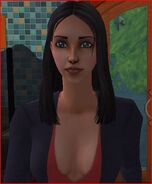