Samantha Cordial is one of the pre-made playable Sims, residing in Belladonna Cove, the neighborhood shipped with The Sims 2: Apartment Life. She is one of the twins of the Cordial family, presumably the younger one according to her memories. Samantha, through family photographs, was always the virtuous, gentle, and dutiful twin (similar to Angela Pleasant), rather than Kimberly (a copy of Lilith Pleasant), her rebellious and not-so-nice twin. Even though Kimberly and Samantha are twins, they have slightly different genetics - Samantha has smaller eyes that don't curve upward, a narrower mouth, jaw, and chin, a smaller nose, thinner lips, and a slightly longer face.

At the start of the game, Samantha is friends with Phoebe Adams, the High Good Witch of Belladonna Cove. She has so much of a good relationship with Phoebe, that she can become a good witch. She can do this by inviting over her magical friend, and using the interaction, "Teach Me the Ways of Light". The player is suggested to do this, because clear evidence shows reagents, both good and bad, are dominating the shelves in the house. If you look closely on the desks, you will notice Crystallized Moonbeams on Samantha's bedroom desk, and Viper's Essence on Kimberly's.

It is possible she has a relationship on the verge of blossoming, as she has three male best friends who could be potential future love interests: Connor Weir, Gabriel Green and Armand DeBateau. If both Samantha and Gabriel appear in the welcome wagon, Samantha will usually flirt with Gabriel and start a romance right there. However some players choose to put her together with her other friend Connor. Samantha has a minor glitch that whenever she gets married, she will get a memory of marrying a rich Sim, even if the Sim she marries has 0 Simoleons, which some players believe is meant to indicate that the developers intended her to marry Armand, the wealthiest of her potential suitors.

Samantha wears a brown frilly sundress with wedged heeled sandals and a red orb-styled necklace, and she also has her black hair in a bob-like haircut. She holds a job in the Medicine career as a Nurse, despite having no interest in Health strangely enough. She may be named after Samantha Stephens, a fictional witch from the American fantasy sitcom Bewitched. If FreeTime is installed, she will have a level 2 enthusiasm in Cuisine, but her predestined hobby will be Tinkering, because of her shy and nice personality. 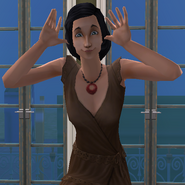 Add an image to this gallery
Retrieved from "https://sims.fandom.com/wiki/Samantha_Cordial?oldid=902434"
Community content is available under CC-BY-SA unless otherwise noted.