Sam Whitt is a large male dog owned by Alice Whitt from Garden Heights, one of the neighborhoods shipped with The Sims Pet Stories. He is an adult Dalmatian and does not wear a collar. He is the deuteragonist in the story called Best in Show. Sam is a good dog with a behaviour problem, for which Alice has to scold him often. During the story Alice signs Sam up for the annual dog show competition and if they win, they'll be able to pay off the bills with the cash prize.

Early in the story, Sam meets Lucy, who is the dog of Thomas Jones, a childhood friend of Alice. The two dogs play together in the garden of Alice's house and seem to be getting along well.

After competing in the dog show at The Show Park, two other contestants' dogs get in a fight, causing them to get disqualified. As a result, Alice and Sam qualify for the SimCity finals instead.

Alice trains Sam throughout the story, but it is through "The Way of the Paw", taught to them by Otis Fielding, that they really connect with each other and learn to understand one another.

Diana DeBore seems to see a possible rival in Alice and Sam and to make sure they can't beat her and Precious in the dog show, she orders one of her henchmen, Reece Mustella, to kidnap Sam. Her plan fails however, because Brock Thornton, the other henchman, tells Alice that Sam is being held in the Abandoned House. Alice and Thomas then come to rescue Sam.

Alice and Sam compete in the dog show final at Bartolomew Greens with a good result. Diana participates last but to all surprise gets disqualified because Precious falls from an obstacle and runs off, meaning that Alice and Sam got the most points and win the competition. Later, police comes and arrests Diana for extortion, conspiracy, embezzlement and dognapping.

At the end of the story Sam mates with Lucy and she gives birth to a litter of puppies. They join the Whitt family, because they are born at their residence.

Alice, Sam and the newborn puppies become playable from their home in 1362 Dargail Lane after the story is over.

As far as personality goes, Sam is a genius, hyper, friendly, and pigpen dog. His main interests are Toys and Playtime. When it comes to his commands, he learns Come Here at the beginning of the story.

Oddly, Sam's memories don't match his relationships at the beginning of the story. Alice isn't part of his pack (though this happens very early in the story) and he doesn't know Roscoe Flores and Meat Grinder at all. 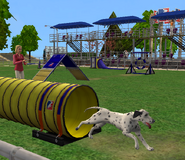 Alice and Sam performing at Bartolomew Greens.
Add an image to this gallery
Retrieved from "https://sims.fandom.com/wiki/Sam_Whitt?oldid=924011"
Community content is available under CC-BY-SA unless otherwise noted.