Sal Zugovich is a pre-made adult Sim from Mesa Flats, one of the neighborhoods shipped with The Sims Pet Stories. He is the husband of Greta Zugovich and Stephen Loyal's old friend and owns Sal's Bratwurst and Culture, the local restaurant and art gallery. In the Midnight Masquerade story is it said that Celeste Girard used to take her cousin Stephen to Sal's restaurant all the time when they were younger and that inspired Stephen to be a chef. Sal first appears in the story at Celeste and Damien Girard's wedding at A Little Salmon Wedding Chapel.

He is seen again later in the story, when Stephen takes Erin Davis on a date to Sal's restaurant. Once they are there, Stephen introduces Erin to Sal, who compliments Erin's appearance. After the date turns bad, Sal comes to Stephen and tells him he needs to become a better listener and gives him a Bougainvillae; A hanging plant under which Sal says he proposed to his wife Greta. He also tells Stephen to never underestimate the power of ordinary beauty. Stephen then heads home.

On the Masquerade day, Sal is at the Amber Hall and, together with Julianne Charlot, welcomes Stephen upon arrival. Sal compliments Stephen on his well prepared catering for the masquerade. He then witnesses everything else that unfolds that night.

Sal has the Popularity aspiration and the Aries zodiac sign. As far as personality goes, Sal is quite neat and outgoing, and somewhat nice. But also quite serious and very lazy. When it comes to his skill points, Sal has maximized the cooking and creativity skills, has a high logic skill, is halfway towards maximizing the charisma skill, is almost halfway towards maximizing the cleaning skill, and has low mechanical and body skills. His main interests are Food, Culture and Work. 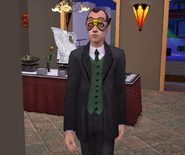 Sal at the Midnight Masquerade.
Add an image to this gallery
Retrieved from "https://sims.fandom.com/wiki/Sal_Zugovich?oldid=924847"
Community content is available under CC-BY-SA unless otherwise noted.