The Roth family is an obvious parody of the Goth family with younger versions of Cassandra (Sandra Roth), Mortimer (Morty Roth) and Bella (Stella Roth) present. The family member most similar to their Goth counterpart is Xander (Alexander Goth). They could also be a spoof of real life wealthy family, The Rothschilds, with Roth even being in both names.

The house is almost identical to the Goth house. They are by far the richest members of Riverblossom Hills neighborhood. The Roth family address is 208 Welsh Lane. Stella and Morty's relationship is very poor and it is never explicitly explained why their marriage turned sour. 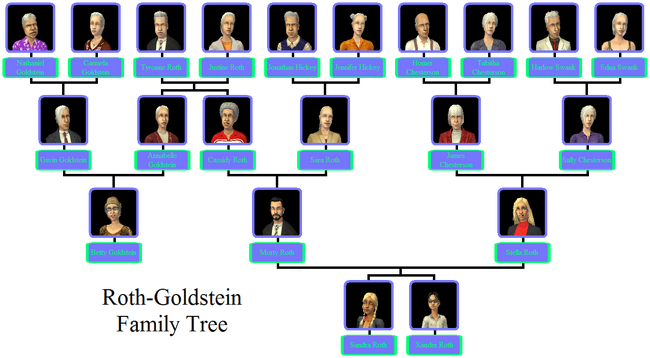 Similarities to the Goths

The Roth family has various resemblances to the Goth family. The most obvious is that the names are very similar. The family names are almost identical, with only the first letter being different. Morty and Xander are very similar to Mortimer and Alexander, and could easily be short forms of those names. Likewise, Stella is similar to Bella, as is Sandra to Cassandra. They also have a mirror-reversed version of the Goth household, although the house is much brighter than the Goths' home. Another similarity between Bella and Stella is that they both wear a red dress, and Stella has similar hobbies to Bella (playing piano, painting).

Differences from the Goths

The Roths are similar to the Goths on many levels, but they are also very different. For instance, the Roths dress much more brightly than the Goths, with the exception of Morty who wears a black uniform while Mortimer wears a red one. Stella (The Roths' version of Bella Goth) hasn't disappeared, and remains with her family. Most of the family do not notably resemble the Goths in facial features, as the Roths have shorter and wider faces, and more prominent ears. The Roths aren't as popular or well known in Riverblossom Hills as the Goths are in Pleasantview, probably because the Roths are still new to their hometown. The Roths are also much less wealthy than the Goths. Stella has the Popularity Aspiration while Bella has the Romance Aspiration. Stella is voiced by Zoe Galvez while Bella is voiced by Gerri Lawlor. The most notable difference may be the Roths' dress code and lifestyle. While the Goths mainly dress in dark, traditional-style clothes, the Roths are very notably more modern and "cooler" than the Goth family. The Goths always believed in traditional, strict upbringing, while the Roths are all about being modern. Annabelle Goldstein, who appears to be a parody of Frida Goth, was married and had a child, Betty Goldstein, while Frida apparently never married or had children. Also, while Stella and Morty's relationship seems to have turned sour, Bella and Mortimer appear to have always been very much in love with each other.

Retrieved from "https://sims.fandom.com/wiki/Roth_family?oldid=940604"
Community content is available under CC-BY-SA unless otherwise noted.