Listen  /ˈroʊmioʊ ˈmɒnti/) is a pre-made teenage Sim that lives in the neighborhood Veronaville. He is the grandson of Patrizio and Isabella Monty, the son of the deceased Claudio and Olivia Monty, and the younger brother of Mercutio Monty. His cousins are Beatrice and Benedick Monty. Romeo has a mutual crush on Juliette Capp, but fears going steady with her because he has the romance aspiration. He works part-time as a Dishwasher in the Culinary career track.

Romeo has the memory "Had 2 Best Friends," although his memories do not show specifically who they are. If the player looks in his relationship panel, it can be seen that his lifetime relationship with Mercutio is above 50, but his daily relationship is around 30. He also has a hat that is not available in Create a Sim, unless CAS is placed in debug mode. Romeo and Juliette might not pair well, due to their aspirations. Juliette is a family Sim and Romeo is a romance Sim. These Sims' wants tend to clash, so the player might want to change Romeo's aspiration if they want Romeo and Juliette to have a happy marriage. Romeo will get an A+ if he goes to school the next day, which could mean he is intelligent, despite his "Heartbreaker" personality. When the game starts, he will usually want to flirt with Juliette's sister Hermia.

While Romeo has black hair and brown eyes, he has recessive alleles for blond hair and light blue eyes.

Romeo is a titular character in the famous Romeo and Juliet. He falls in love with his enemies' daughter, but is later banished when he kills Tybalt in a street brawl. His plans to meet Juliet are mixed up and the play ends with their deaths. 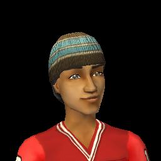 Romeo's appearance in-game
Add an image to this gallery

Retrieved from "https://sims.fandom.com/wiki/Romeo_Monty?oldid=925555"
Community content is available under CC-BY-SA unless otherwise noted.