Rod Humble is the Executive Producer for the Sims division of the video game company Electronic Arts since 2004.[1] He has been contributing to the development of games since 1990, and is best known for his work on the Electronic Arts titles, The Sims 2 and The Sims 3. He also develops his own games.

On 7 October 2008, a press release noted that Electronic Arts Inc. has promoted Humble to Executive Vice President and Head of The Sims Label of EA. In this role, Humble will be responsible for The Sims Label, which develops and markets life-simulation games and online communities with an emphasis on creativity, community and humor.

On 23 December 2010, SimPrograms posted an announcement[2] that Humble was leaving (had left?) Electronic Arts to work for Linden Lab, the creators of Second Life.

There is a Sim-version of himself introduced when the The Sims 2: FreeTime expansion pack is installed. When the player first plays a non-college residential lot (or returns to one after installing the expansion) with a new household, the NPC makes a brief visit around 10:00 am and leaves a wrapped package, which turns out to be a computer. The computer comes with an "Easter egg"; an official video of The Sims 3 that had not been previously released.[n 1][n 2] There are mods which can either prevent him from appearing or allow the player to decide whether or not he will leave the computer.

When viewing Rod's character data in SimPE, it is determined that he is an object, meaning he cannot be played, though the player can Create a Sim that looks like him and name it Rod Humble. However it is very difficult to replicate his appearance without cloning him, which itself is very complicated since his appearance can't be extracted directly. An exact replica of Rod can be downloaded here. This is one way of playing as Rod Humble without the risk of corrupting the game, except that he will be treated as a regular Sim, without Rod's unique behaviors. He has no personality points or interests. His zodiac sign is not recognized when viewing SimPE; however, when viewed in-game, he is a Cancer.

Warning
DO NOT attempt to add Rod Humble to a household, try to turn him into a supernatural creature, such as a vampire, werewolf, or witch, or tamper with him in SimPE in any way or form. As Rod Humble is a global NPC (meaning he is the same in all neighborhoods) doing so can cause game corruption, fixed only by uninstalling and re-installing the game.

The message shown to the player when Humble delivers the gift.

What happens when a house's deck is too small. 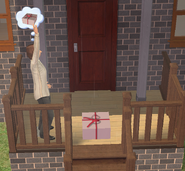 And sometimes, Rod even traps himself with his own gift.

Humble's look in the game. 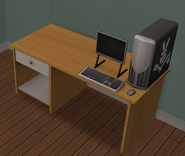 Humble's look as a Sim.

Humble's actual look.
Add an image to this gallery

Retrieved from "https://sims.fandom.com/wiki/Rod_Humble?oldid=907414"
Community content is available under CC-BY-SA unless otherwise noted.