Rocky Tanker is a pre-made townie who resides in Bridgeport. He is usually seen as a Bouncer or Paparazzi, though when first loaded, he is unemployed. He is Exes with Brigid Steele and they currently hate each other. He is also best friends forever with Big Hartley. He has no skills. He carries a book in his inventory. Unusually for a pre-made young adult, he only has three traits instead of the usual five. He can be made playable by marrying him, or asking him to move in. 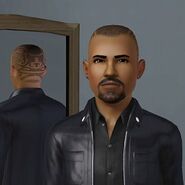 Rocky in CAS
Add an image to this gallery
Retrieved from "https://sims.fandom.com/wiki/Rocky_Tanker?oldid=897939"
Community content is available under CC-BY-SA unless otherwise noted.