The Sims Wiki
Register
Don't have an account?
Sign In
Advertisement
in: Sims, Female Sims, Adults,
and 23 more
English

Riley Harlow is a pre-made playable adult sim from Four Corners, one of the neighborhoods shipped with The Sims Life Stories. She is the protagonist of Riley's story. Having lost her job and facing eviction from her house in SimCity, Riley arrived in the town of Four Corners to stay with her aunt Sharon Foss. Details of her early life before moving to Four Corners are largely left up to the player's imagination, but she does mention that she was both president of the chess club and captain of the football team at her high school. She also describes herself as a "certified ninja" at one point, a qualification that seems to be taken seriously, at least by Riley herself.

Riley mentions having eaten at a burger bar in Pleasantview on her way to Four Corners, suggesting that the game takes place in the same universe as The Sims 2 and that the two neighborhoods are fairly close together. This would make sense, as Riley is stated to have just moved to Four Corners from SimCity, and Pleasantview is believed to be a suburb of the city, meaning that she may well have had to pass through Pleasantview en route.

When Riley is directed to look for a job on the computer, only the Entertainment career will be available, no matter how many times she is directed to look again. A similar thing happens with Tank Grunt in The Sims 2, who can only access the Military career when the Grunt family is first played.

When Riley's household is first played, she will be 29 days away from becoming an elder. She has the Fortune aspiration and the Aries zodiac sign. Her interests in the Free Play version of the neighborhood are different from the ones she has in the Story Mode version.

Sometimes I feel like a total basket case. Like, what am I doing with my life? I've always wanted a great job, a great boyfriend—and now I have it all, sort of. So how come I'm doubting every decision I make? OMG, I'm only 23. I just need to have some FUN! — Riley's biography in The Sims Stories site

After Aunt Sharon suddenly left on a business trip, Riley was welcomed by Mickey Smith, Fiona Fortuna, and Agora Tchotchke. The next day, she invited Mickey over, not knowing he would bring Agora with him. Riley tried to flirt with Mickey, and Agora got angry with her. She stormed off in a huff, leaving Mickey at Riley's house. Mickey called Riley the next day and asked her if she wanted to go to Starlight Cafe and Market, where they shared their first kiss, and became boyfriend and girlfriend. Later, Fiona called Riley saying that her ex-boyfriend from high school, Dylan Kincaid, moved into Four Corners a few weeks before she did. He called Riley, and invited himself over to her house for dinner. They fell in love again, and Riley was conflicted about her feelings for Dylan and her relationship with Mickey. Riley invited Mickey to Lead's Gym, not knowing they would meet Dylan there. Mickey thought Riley was dating Dylan, and dumped her on the spot.

Dylan later went to Riley's house to comfort her. Feeling particularly down, Riley decided to go to The Corner Boutique. She invited Dylan, but he made the excuse that he had to work. So she then went alone, and saw Dylan there on a date with Ashley Sinclair. After attacking him, he dumped her, and Riley discovered Dylan dropped his wallet during the fight. She took the money, and spent it on clothes, but went home when she saw Mickey with Agora, since the two of them were engaged now. Riley then decided to make up with Mickey, but when they finally do, he had to go and marry Agora.

Riley was devastated, and things only got worse when Dylan showed up yelling at her for wrecking everything. Aunt Sharon showed up with the police, and Dylan was arrested for kidnapping Sharon and holding her hostage in his basement. Riley found out Agora was involved too, and went to Old Grove Gardens to stop the wedding between Mickey and Agora. When she got there, she told Mickey everything, and Mickey left Agora at the altar.

Agora was furious with Riley, and got in a fight with her. Riley won, and Agora was arrested. Mickey asked Riley to marry her on the spot, and they went on their honeymoon to the Simaican Isles, a play on the Jamaican Isles. When they got back, Sharon announced to them that she was giving them the house, and left on a date with a guy she met over the internet. Riley then became pregnant, and she and Mickey threw a house party to commemorate the occasion. Riley then has the baby(s), and this is where the story ends.

After the story, Riley, Mickey, and their baby(s) become a playable family living in 10 Hyacinth Circle.

The TV show that Vincent and Naomi watch in Vincent's story, entitled For Love or Simoleons, is obviously based on Riley's story. (After the episode ends, Naomi comments that she "can't believe her ex-boyfriend kidnapped her aunt!", as well as referencing several other plot points from Riley's chapters.) This could mean that Riley's story is a television show within Vincent's story. However, since Riley is shown pursuing the Entertainment career, it's possible that the two stories take place in the same universe, and that Riley makes a TV show based on her life after her story has ended. This would mean that Vincent's story takes place sometime after Riley's has ended, which is the order of play encouraged by the game. 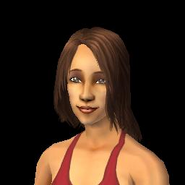 Riley's head-shot in the Free Play version of the neighborhood.