Richard Norman is one of the pre-made, yet unplayable ancestral Sims that resided in Veronaville in The Sims 2. He was the son of William and Mathilde Norman, the husband of Anne Norman (née Anjou), the father of Albany Capp (né Norman), and the grandfather of Miranda, Hal, Desdemona and Ariel Capp.

Richard's gravestone does not exist within Veronaville, so he can't be made playable without the use of hacks. As a result, the only indication of Richard's existence is provided by the family tree of his descendants, and the memories of his son. He and his wife died as adults like the deceased parents of many Veronaville Sims. Oddly, Richard wears a university professor's outfit. He died before Albany got engaged, and his wife died when their youngest grandchild Ariel was born.

Like his wife, Richard has a hidden thumbnail, found in the game files and programs such as SimPE. This headshot is quite different from the real one, as it shows Richard as an elder with a red shirt with white vertical streaks, and short straight hair, rather than short curly hair. This is known to happen with many other deceased Veronaville Sims.

Richard the Third was a king of England, and the title character in a Shakespearian play. 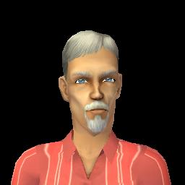 Richard's second thumbnail showing him as an elder.
Add an image to this gallery

Retrieved from "https://sims.fandom.com/wiki/Richard_Norman?oldid=820448"
Community content is available under CC-BY-SA unless otherwise noted.