Reya Estefani is a pre-made pizza delivery woman introduced in Isla Paradiso from The Sims 3: Island Paradise. She can be made playable by marrying her, or asking her to move in.

Reya has eight points in the Scuba Diving skill and four points in the cooking and writing skills. She also has one point in the dominoes hidden skill. 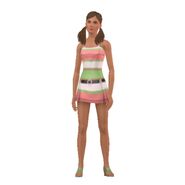 Reya's everyday clothing
Add an image to this gallery
Retrieved from "https://sims.fandom.com/wiki/Reya_Estefani?oldid=901927"
Community content is available under CC-BY-SA unless otherwise noted.