Reputation is a feature that was introduced in The Urbz: Sims in the City, The Sims 2: Apartment Life, Patch 22 of The Sims 3, and The Sims 4: Get Famous.

Reputation is determined by one's relationship with other Urbz. Reputation levels range from Level 0 to Level 100. The maximum reputation an Urb can have is 999. Rep is displayed on the HUD and when it gets to the big star, the Rep level will go up. Socializing with Urbz to build relationships will increase reputation. Rep is needed to get into VIP Rooms, go to new areas and get new items (Such as a new Skill Builder machine), and as well as seeing your Urb on posters. 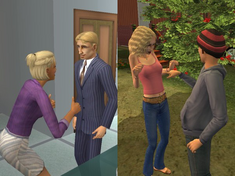 Townies greeting Sims nicely and rudely based on their reputation

Each Sim has their own individual reputation. Reputation is determined by how well Sims interact with other in the society, whether it's a good or bad interaction. Reputation simology can be found in the personality panel. When clicking it, the reputation meter will be shown in a bar. The reputation point is measured in the meter from the thresholds and as monikers, and it ranges from -100 to 100 (Although there is no written number in the game, each line represents 20 points). Each threshold has a different reputation level. The middle threshold is the Average Cabbage reputation. All Sims except the premade Belladonna Cove Sims start from this level. Below are the levels of reputation:

When a Sim meets a new townie for the first time, there is a 30% chance he/she will be given a secret networking depending on their relationship. If a Sim interacts well and gains enough daily relationship, he/she might be given a beneficial network. On the other hand, making a bad impression will make the Sim be given a penalty network. Secret networking can only be received by newly met townies; if the townie has given a network, or if the townie didn't give one at the first time they met, he/she will never network again. Other than townies, apartment neighbors and roommates may also give Sims a secret network.

Secret networking does not depend on a Sims reputation, though high reputation does increase the chance. Instead, it depends on the first impression a Sim shows to another. Thus, network can be received in residential lots. Each townie gives only one network to one particular Sim or none at all, and never twice.

If a Sim makes a good impression to a townie, something good can come to them from it. They might receive one of these benefits. Inexplicably, these benefits are not available to young adults, even though a young adult townie may be the one giving the benefit.

Free Hi-Tech Object
Sim will be given either Little Sister WD15 Computer or Soma "Wall-Eye" Large Screen Flat-Panel TV to their inventory directly.

Lower Rent
A Sim who receives this benefit will have their rent lowered by 10% the next time they pay their rent. This benefit, however, won't stack if other household members also receive this. This benefit works like a memory token, so the benefit sticks with the Sim forever, not the family. Thus, if the Sim moves out, the other household members will have to pay the normal rent price. If the Sim rents another apartment, they still retain the benefit.

Cheaper Catalog Objects
Sim and the other member of the household will get a 10% discount for all objects in the catalog. Similar to Lower Rent benefit, this benefit belongs to one Sim, not the family. If other household members also gain this benefit, the discount won't stack. This benefit, however, will stack with the Wholesale business perk. So Sim with Shark of Sharks perk will get 40% discount off, for 30% from the perk and extra 10% from the benefit.

Good Reputation
Sim who is not in Sociable Celebrity reputation will gain +30 reputation score boost.

Instant Promotion
The next time Sim goes to work, they will be guaranteed a promotion. There won't be a chance card when Sim receives this benefit.

Higher Wages
Sim will get a 5% raise for their wages. This is similar to Skilled Negotiator Fortune aspiration benefit, which will also add an extra raise.

Nice Job in a New Career
Sim will be offered a new job on different career track. This might be a good opportunity, as the starting level is usually around level 3, 4, or 5.

Instant Blind Date
Requires Nightlife. Sim will be offered a blind date right on the spot. A Sim with the preferred gender and maximum chemistry will be generated for the Sim's date, just like gypsy matchmaker's service. It is important to note that it is possible that a Sim's romantic interest will offer this network, and choosing "Yes" will instantly cause the Sim to get caught cheating.

Job Demotion
The next time Sim goes to work, they will be guaranteed a demotion. There won't be a chance card when Sim receives this penalty.

Higher Rent
Sim who receives this penalty will have their rent raised by 5% the next time they pay their rent. This penalty, however, won't stack if other household members also receive this. Similar to Lower Rent benefit, this penalty will stick with the Sim. So, whenever this Sim moves out and rents another apartment, he/she will still have to pay the extra rent.

Office Pariah
Sim's friend requirement for promotion is increased by 1. This penalty can be erased when the Sim finds a new job or quits their current job.

Bad Reputation
Sim who is not in Sleazy Slimeball reputation will lose 30 reputation score.

Reputation is re-introduced in the Generations expansion pack and carried forward in Patch 22, and unlike the feature from Apartment Life, the reputation involves romance instead of social relationships. Sims could attain a romantic reputation based on the romantic relationships a Sim has. Other people will notice when the Sims have dates, displays affection towards other Sims, or performs other romantic interactions. This is tracked in a scrapbook and may display the Sim's reputation. Once gained, romantic reputations can only be cleared with Clean Slate lifetime reward.

The Sims 4: Get Famous

Article Cleanup
This article requires a cleanup to meet The Sims Wiki's quality standards.
Reason: The blockquotes just don't work here
Please improve this article if you can.
Reputation returns once again in The Sims 4: Get Famous. Together with the celebrity level, it plays a part in the public image of a Sim. Every Sim has a reputation, but if it stays neutral it won't have any bearing on gameplay.

A Sim's reputation is based on the idea of treating others as you yourself would want to be treated. Sims must go out of their way to be kind or mean to build their reputation. In many cases, a Sim's reputation won't change unless another Sim from the neighborhood is nearby to witness their behavior.

There are 7 types of reputation.

(Sim Name) is a shining beacon of positivty for the community. Passing by other Sims will elicit friendly waves and cheerful smiles, as everyone's day is brightened by his/her presence.

Friends will be more forgiving if he/she commits any social miscues, and they won't be quick to judge him/her.

Finally, (Sim Name) has earned the credibility to host his/her very own Charity Benefit parties. Gather other do-gooders together for a fun time while contributing towards excellent causes!

Everyone loves attending social events that (Sim Name) hosts, so it'll be easier to achieve Gold Level rewards during one. In addition, he/she'll recieve phone calls with exciting opportunities, such as attending Charity Benefit parties, job offers to join new careers--with immediate promotions up the ranks, and many more.

Should (Sim Name) be interested in dating, a great reputation can help with that as well, Romantic introductions now have a chance of starting a relationship off with heightened romance.

When introducing himself/herself to new Sims, (Sim Name) has a chance to start the relationship off with a higher amount of friendship, as his/her reputation now proceeds him/her.

With a neutral reputation, other Sims won't be predisposed to feeling any particular way about you.

When attempting to make friends with new Sims, there's a chance that they'll have already heard of (Sim Name)'s disreputable actions, thus starting their relationship off on the wrong foot.

That said, should he/she happen to introduced himself/herself to other troublemakers, they're likely to immediately hit things off and become fast friends.

Having an awful reputation can have it's benefits. (Sim Name) may recieve some interesting opportunities from other Sims of ill repute, such as attending a Lampoon Party, making other scumbag friends, or being setup on dates with Sims of questionable morals. And if he/she finds himself/herself in a career that isn't exactly illegal, he/she'll earn bonus job performance.

Oh and, despite what you may have heard... being a bad boy/girl isn't always the way to another Sim's heart. Due to his/her awful reputation, (Sim Name) may have a difficult time when attempting romantic introductions.

A reputation like (Sim Name)'s can elicit strong reactions. Other Sims that she encounters may display strongly negative reactions to her mere presence.

With such an outright terrible reputation, it can be difficult building bridges with other Sims. Bribery is the answer. Bribe other Sims for their friendship... Bribe bosses for a boost in job performance... Money solves everything.

Finally, (Sim Name) might as well lean into their reputation he/she's established. He/She can now throew his/her very own Lampoon Party! Just try not to make the guest of honor laugh themselves to death, ok?

Retrieved from "https://sims.fandom.com/wiki/Reputation?oldid=845414"
Community content is available under CC-BY-SA unless otherwise noted.