The Sims Wiki
Register
Don't have an account?
Sign In
Advertisement
in: Services, Types of NPCs, Repairmen 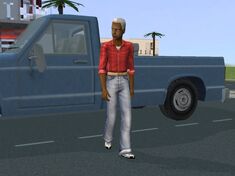 Repairman in The Sims 2

The repairman is an NPC that will repair broken objects and unclog the toilet. He/She visits only once when called from the Service menu on the phone and leaves once everything is fixed. In The Sims and The Sims 2, he/she will also leave if he/she is unable to reach the broken object.

Sometimes the repairman will not have ANY mechanical skill.

In The Sims, The Sims for console, The Sims Bustin' Out, The Sims 3, and The Sims 4, the repairman will come at any time.

In The Sims, the repairman is an NPC named Repairman Bruno. He can be called at any time by using the "Services..." menu on a phone, and selecting "Repairman". He charges §50 per hour, and will come whenever he is called.

In addition to fixing plumbing, electronics, and appliances, he will also change burned-out light bulbs.

In The Sims 2, repair service costs §50 per hour, plus a base fee of §10. While a repairman can be called at any time by using the Call... option on a phone and selecting Service, repair service is not available around the clock, as it is in other games. Instead, a repairman will work between 09:00 and 17:00 (5:00 pm).

In addition to fixing plumbing, electronics, and appliances, a repairman will also tune pianos.

In The Sims 3, clicking on a broken object gives the option to "Call Repairman." The repairman will charge §50/hour.

Each world, except for the vacation sub-worlds in World Adventures[confirmation needed], has two pre-made repairmen, one male, one female.

Repairmen were not included in the initial release of The Sims 4, but were re-added in patch 26. They charge a base price of §100 for coming over, plus an additional §10/hour. As in The Sims 3, clicking on a broken object gives the option to call a repairman.