Red S. Hirt is a pre-made male Sim featured in The Sims 2 for console, who lives at Sunset Canyon in Strangetown with Helga Mandrake, Billy Specter and Sheila Deadbones, whom are all deceased. He used to date Helga, before her demise, and he is now trying to find her grave in order to resurrect her.

He shares a +20 relationship with Billy Specter and Sheila Deadbones, but doesn't even know his former girlfriend, Helga, as he has no relationship points with her. 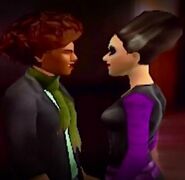 Add an image to this gallery
Retrieved from "https://sims.fandom.com/wiki/Red_S._Hirt?oldid=923022"
Community content is available under CC-BY-SA unless otherwise noted.