Listen) family comes with the expansion pack The Sims 2: Open for Business. They own a furniture shop known as, "Ramirez's Fine Furniture". Their names and their dark complexion indicate that they are of Latino origin.

The family consists of two adults, Checo and Lisa, and their daughter Tessa, who is a child. The family started when Juan Ramirez married Theresa Ramirez. Their only child, Checo, married Lisa, the only child of Armando Mendoza and Carmen Mendoza. They live in a medium-sized, two story house, with two bedrooms, two bathrooms, and an office on the second floor; and a half-bathroom, living room, kitchen, and dining room on the first floor. The house is priced around 75,000 simoleons and the family has 7000 simoleons in funds.

Lisa Ramirez: -- is an English diminutive of Elizabeth, the English form of the Hebrew name, Elisheva, or Elisheba. Originally it meant “My God is Bountiful,” “God of Plenty,” “Consecrated to God,” “Oath of God,” “God is Satisfaction,” or “God is Perfection.”

Checo Ramirez: -- Checo may be a variant of the nickname Chico. Chico can be translated as "boy" or "kid", so Checo or Chico may simply be something one or both of his parents called him. A literal translation of "Checo" would be "Czech", but that doesn't make much sense as an origin for the name. Lisa's bio refers to him as "Checoleín", a name that is probably invented, and which does not appear elsewhere. It is not clear whether Checoleín is meant to be his given name, or just Lisa's private name for him.

Tessa Ramirez: -- Originally a pet form of Theresa (harvester), Tessa is now commonly bestowed as an independent given name.

Juan Ramirez -- Was occasionally used in English-speaking countries due to the influence of Lord Byron’s Don Juan and Mozart’s opera of the same name (at this time it was usually mispronounced “joo-awn”). It is currently one of the most popular Spanish names in the United States.

Theresa Ramirez -- Therasia, being borne by the Spanish wife of Saint Paulinus of Nola in the 4th century. The meaning is uncertain, but it could be derived from Greek θερος (theros) "summer", from Greek θεριζω (therizo) "to harvest",

Mendoza Family -- Is a common Spanish surname and place name. The Portuguese version is Mendonça.

Carmen Mendoza -- is a French opéra comique by Georges Bizet. The libretto is by Henri Meilhac and Ludovic Halévy, based on the novella of the same title by Prosper Mérimée, 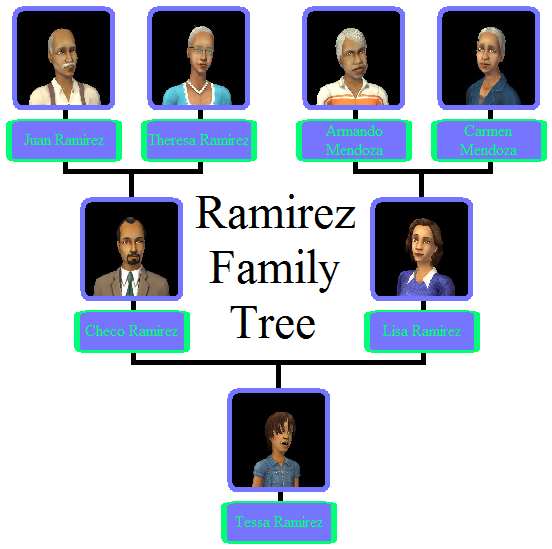 Add an image to this gallery
Retrieved from "https://sims.fandom.com/wiki/Ramirez_family?oldid=825316"
Community content is available under CC-BY-SA unless otherwise noted.