Rainflower Ivy is a premade Sim living with his wife and kids in Moonlight Falls. He believes strongly in the protection of the environment and pursues his love of music in the music career as a lead guitarist. Rainflower is level 7 in guitar skill and carries a black and white leopard print guitar in his inventory along with a book called "How To Win At Video Games Without Really Trying".

Despite Rainflower being married to Annalove, his gender preference shows that he has a preference for males instead of females.

In The Sims 4: Movie Hangout Stuff, Rainflower Ivy is mentioned in two doors' object descriptions as part of Season 8, Episode 7 of Plumbob Pickers. It's unknown whether he played himself, or was portrayed by someone else. 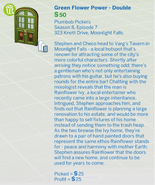 One of the object descriptions in which Rainflower Ivy is mentioned.
Add an image to this gallery
Retrieved from "https://sims.fandom.com/wiki/Rainflower_Ivy?oldid=888068"
Community content is available under CC-BY-SA unless otherwise noted.