The Racket family is a large family in Twinbrook. It consists of elderly grandparents, Max and his wife Marigold, their sons Dudley, Bill and Dennis, as well as Dennis' wife Silver and the couple's two teenage children, Shark and Lolly. The main part of the family lives at 53 Puddlewick Road and has 75,000 simoleons. Dudley lives by himself apart from his family. He lives at 12 Catfish Flats Drive with 1,300 simoleons.

The Racket family seems to have been modeled on a mafia family. One of the clues alluding to this is that many of the members seem to have monikers such as Shark or Silver. Another clue is that some of the family's bios state that Max Racket has a mystery "business," and, according to most of them, the "business" is one of crime. The name Racket comes from racket, which is an illegal business, usually run as part of organized crime.

Max and Marigold, the family leaders are both Evil and Mean-Spirited, having selfish streaks. Marigold appears to be the actual head of the mafia and not her husband Max, having had a history working as a Supervillainess in the Criminal career. However, it is Max who is considered the "legendary patriarch", possibly because of his Lucky trait and actual crime being a deliberate Kleptomaniac who then either kept the stolen items for himself or sold the goods at the Consignment store for money, as evident from his high skill level in the Consignment Skill.

The teens, Lolly and Shark hate each other, Lolly being a Hopeless Romantic and Never Nude, and Shark being less romantic and more flirtatious kind of guy. Both are not aware of the family's business, and, according to the family's bio, they beg for attention, but end up ignored and forgotten.

Dennis is a Kleptomaniac and a Hopeless Romantic, a Neat Mooch and Ambitious, who has joined the mafia along with his mother, Marigold. While his wife Silver is a snobby party-girl with a selfish streak, who was hesitant about marrying Dennis, but ended up accepting when she became aware of the amount of cash the family had. Dennis' brother, Dudley is a kind-hearted and perceptive man who quickly learned the truth about family's business and grew a strong sense of justice and tried to disconnect from his family by moving out of the manor (it is implied that he was teased and tormented by his family when he lived with them) and Bill, Dennis' brother is a difficult, inappropriate man. The three brothers appear to be competing for something, as they all have a rivalry with each other.

There is a deceased Sim in Twinbrook named S. Windle Racket. It is implied that he is related to the Racket family since he has both the Evil trait and the Mean-Spirited trait and his lifetime wish is to be the emperor of evil.

An urn of another deceased Sim, Pixie Carlton, can be found inside the house, Pixie does not appear on the family tree and is most likely not related to the Rackets in any way. Pixie died of Electrocution, and she might have been murdered, while it is somewhat impossible in normal gameplay. It is unknown why Pixie's urn is in the house. 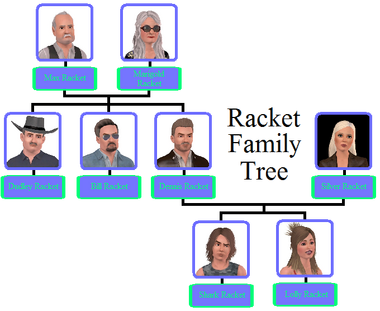 Retrieved from "https://sims.fandom.com/wiki/Racket_family?oldid=852372"
Community content is available under CC-BY-SA unless otherwise noted.