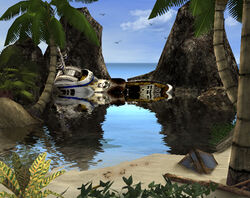 The Queen Solomon is a cruise ship in The Sims Castaway Stories. During the night, the ship crashes and eventually sinks. Jessica Knight, David Bennett or the player's customized Sim wakes up on a desert beach on Felicity Island and the game begins. Curiously, in the character's menu selection there is a female Sim assigned to the ship that looks exactly like Amaya Flores. A small yacht, Simplicity, is the equivalent of the Queen Solomon in the console version of the game.

Sims on the Queen SolomonEdit

Retrieved from "https://sims.fandom.com/wiki/Queen_Solomon?oldid=922565"
Community content is available under CC-BY-SA unless otherwise noted.