The Sims Wiki
Register
Don't have an account?
Sign In
Advertisement
in: Interactions, University, Generations, The Sims 4
English 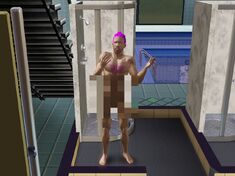 A hair dye prank in the shower

The Sims 2: University introduced three new pranks that Sims can pull on each other. With the addition of rugs in The Sims 2: Nightlife, children can do a static charge prank. PlantSims have a special prank of their own. While the prank is taking place, other Sims in the room will gather around to watch it. Playful Sims will laugh and nice Sims will watch worriedly. Sims with low playful and nice scores may boo the prankster.

There are also pranks which involve objects. These pranks will attract the attention of other Sims on the lot, but will not affect their relationship with the prankster. 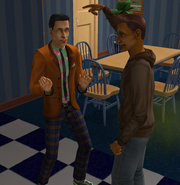 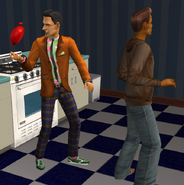 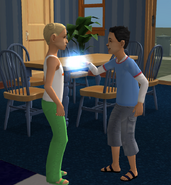 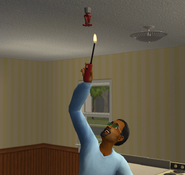 A soap in fountain prank.

The Sims 3: Generations adds a prank system for teenagers. An early game trailer showed a number of pranks, including a Sim letting off a "stink bomb" in a library.[1] Sims can be punished if they are caught preparing a prank, depending on the severity of the prank. Domestic and misdemeanor pranks are punished by scolding or timeouts; school pranks are punished by detention; and neighborhood delinquent behavior are punished by police involvement. Only children and teens can pull pranks. Children can plant booby traps, and teenagers can also prank neighbors and their school. Sims will get a negative moodlet if they fall victim to a prank, unless they have a good sense of humor. Children and teens caught pranking will get grounded by their parents.

In The Sims 3: Supernatural, fairies are introduced, which are the creatures known for mischief. Fairies can use their magic to prank other Sims, which manifest once after turning into teen. In addition to normal and magic booby traps, they can pull a prank directly to a Sim when socializing.

These pranks can be set up on objects, which trigger when a Sim uses it.

Teenagers can pull off these pranks on the homes of other residents. These can be initiated by clicking on the target house. If the teen gets caught by the residents, they will be warned or be escorted home by the police, where they will be grounded by their parents.

Teenagers can also prank their school in a variety of ways. Getting caught pranking the school will result in both a detention from the school, and a grounding from the teen's parents.

As the fairy progresses with fairy magic hidden skill, they unlock new fairy tricks that can be performed on other Sims. Playing them on other fairies or witches are susceptible to getting backfired on the prankster.

Pranks return again in The Sims 4 and are found under the mischief social category, with the exception being the prank call. While some basic pranks are already available to Sims, most of the other pranks are acquired by raising the mischief skill. Although pranks are usually successful, target Sims who have either a high mischief or logic skill are able to stop pranks, causing them to backfire. Pranks can also be considered as a funny interaction, if the target Sim is in a good mood and the current conversation is going nicely. Children can also pull various pranks on other children and can gain more pranks by raising their mischief skill, after mastering the social skill.

When either an adult or a child Sim reaches a high mischief skill, they can become partners in crime with their friends. Both Sims then have the possibility to prank their workplace or school in variety of ways. The prank will happen when the Sim has gone to work or school, and have either a positive or a negative outcome. Having a negative outcome results in a decrease of work/school performance and an embarrassed moodlet.

A sim pranking a toilet